Minister for Justice says legislation needed ahead of poll, which could take place in 2018 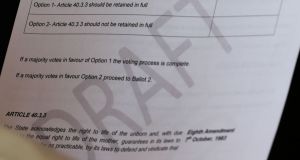 Privately, many senior political figures are sceptical that a referendum to enable the introduction of abortion on request would pass in a referendum, despite the vote at the Citizens Assembly. Photograph Nick Bradshaw

Politicians in all parties have concluded that a referendum on abortion is inevitable following the Citizens’ Assembly recommendations at the weekend for an extensive liberalisation of the anti-abortion laws.

Ministers said the process set out in the programme for government will be followed, under which the assembly’s recommendations will be passed to a special Oireachtas committee for consideration.

The setting up of the committee could be delayed by a wrangle between the Dáil and the Seanad over the numbers from each House to serve on the new body.

Before Easter the Seanad nominated seven members to the committee, rather than the four which had been expected. The expanded size of the committee means Fine Gael and Fianna Fáil combined will not command a majority, as both parties had envisaged.

The name of Fine Gael Senator Jerry Buttimer, who chaired a special committee on abortion before the 2013 Protection of Life During Pregnancy Bill was introduced, has been floated as a possible chairman.

Speaking in Limerick, Fine Gael Minister Simon Coveney said the recommendations of the assembly “will now go to an Oireachtas committee that is specifically set up to tease through those recommendations and to try to find political consensus around how to deal with that”.

“We have given a commitment to a lot of people who are concerned about these issues, that we would go through a process, but that we would move forward. And that does need to happen; governments are elected make decisions and to make things happen,” Mr Coveney said.

Minister for Social Protection Leo Varadkar envisaged a referendum on abortion next year. He said it was essential the debate ahead was conducted in a manner respectful of different points of view.

“Over the next few months, the all-party Oireachtas committee will consider the assembly’s advice and refine it into a proposal that can be put to the people. I believe that once this has been done, a final proposal should be put in a referendum in 2018 so that the people can have their say.”

Minister for Public Expenditure Paschal Donohoe said it was not possible to say when a referendum might be held.

“I can’t at this point give an indication as to what a legislative timeline could be for the simple reason that the Oireachtas committee now has to form, now has to consider this matter, which they will do,” he said.

However, the Tánaiste and Minister for Justice Frances Fitzgerald said that there should be a referendum next year, but that legislation governing abortion – to be implemented after the referendum – would need to be published before the vote.

“My own view has always been that the Constitution is not the place to deal with this very complex issue; the best place is between a woman and her doctors but of course you also have to have an appropriate legislative basis,” she said.

Privately, many senior political figures are sceptical that a referendum to enable the introduction of abortion on request would pass in a referendum, despite the vote at the Citizens’ Assembly.