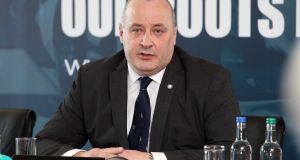 GRA president Ciarán O’Neill says association not given data to support “what was being alleged” relating to one million phantom tests. Photograph: Conor Ó Mearáin

Senior Garda management is to blame for the debacle over exaggerated alcohol breath testing figures, but they are seeking to blame rank-and-file gardaí unfairly, the biggest Garda staff association has said.

In a strong defence of its 10,200 rank-and-file members, the Garda Representative Association (GRA) also said no proof had been supplied to support the claim that one million breath tests actually carried out had been inflated to two million in official records.

The association said the system for recording data was botched from the time random breath testing was rolled out almost a decade ago.

GRA president Ciarán O’Neill, speaking at the opening of the GRA’s annual conference in Galway, said his association had not been supplied with any data that would support “what was being alleged” relating to one million phantom breath tests between 2012 and 2016.

“We are told what is being alleged, like everybody is being told, but we don’t have the specific data to refute or agree that these are the right figures.”

The Garda acknowledged last month that the number of breath tests carried out between 2011 and 2016 had been overestimated by nearly one million. Close on two million tests had been recorded, but only slightly above one million had actually been carried out.

Mr O’Neill said that based on the encounters his members had daily with the public, the Irish people also believed senior Garda management was to blame over the breath-testing debacle.

GRA deputy president Jim Mulligan said recent changes to the Garda’s computerised Pulse database showed the recording procedures put in place by senior management were never suitable and were at the heart of the problem.

Changes to the recording fields on the database had recently been made to ensure all data collected at checkpoints could be entered. The number of tests on each handheld testing device was now being recorded before and after each checkpoint, creating an accurate record of the number of motorists tested.

Mr Mulligan said that when gardaí previously rang the Garda information centre in Castlebar to log testing data after a checkpoint, they were asked how many cars went through it.

“How are you meant to physically count the number of cars that went past you on the N11 in Stillorgan in a half-hour period? There was no system in place to do it.”