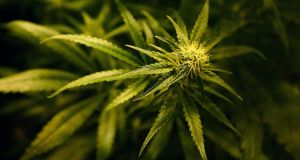 Cannabis worth €740,000 was seized on Monday morning by gardaí in the Dublin city centre docklands area as part of an operation understood to be targeting the Kinahan criminal organisation.

Two men aged 30 and 48 were arrested and taken to Irishtown Garda station for questioning. They can be held for up to seven days before being charged.

Members of the Garda National Drugs and Organised Crime Bureau stopped the two men driving a van and a car on Monday morning, and the cannabis was found following a search of the vehicles. The van was stopped on St John Rodgersons Quay, in Dublin 2.

In total thirty seven kilos of cannabis was found in the vehicles, with an estimated street sale value of €740,000.

The two men are currently detained for drug trafficking. It is understood they are known associates of the Kinahan gang and that the arrests were made following a surveillance operation and the receipt of confidential information given to the Bureau.

The Bureau is part of a large scale operation arising out of the ongoing feud between the Kinahan and Hutch gangs which has so far claimed eleven lives.

Gardaí have achieved significant success against the group in recent months with large amounts of drugs and firearms being seized in a series of operations.

Last year gardaí seized over €30 million in illegal drugs in Ireland. Since 2012 the estimated value of all illegal drugs seized and destroyed by gardaí has been €214 million.

Figures from the Revenue commission show 2014 was the biggest year for illegal drug seizures, with just over €90 million confiscated and destroyed by the authorities.

The lowest haul of illegal drug seizures by the Garda national drugs unit in recent years was 2013, when a total estimated value of €20 million in drugs was confiscated.

The figures from the State’s revenue office were released to Sinn Féin TD Pearse Doherty following a parliamentary question put to the Minister for Finance Michael Noonan.

Finance Minister Michael Noonan said the “values are estimated at the time of seizure and before full forensic analysis is complete”.

1 Growing hope in Government of partial easing of restrictions after May bank holiday
2 Coronavirus: Government to extend restrictions for at least two weeks
3 Coronavirus: Ireland will have to ‘live alongside the virus’
4 Coronavirus: More ‘striking’ evidence BCG vaccine might protect against Covid-19
5 Impact of coronavirus ‘overwhelming’ in Republic but for public-health controls
Real news has value SUBSCRIBE