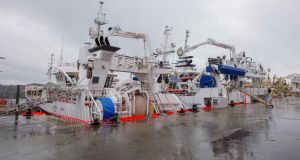 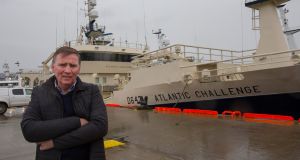 Eugene McBrearty, owner of the Killybegs Electrical Refrigeration Services group, pictured on Blackrock Pier where the Atlantic Challenge and many fishing vessels are tied up. Photograph: Brian Farrell/Irish Times

Fisherman Michael Cavanagh has no doubts about the potential for violence on the high seas in the event of a no-deal Brexit at the end of the month.

The Greencastle-based skipper , says that just after the initial March 29th deadline passed, an Irish crew fishing for crab off Scotland got a nasty shock, even though there had been an extension.

“They went to haul their pots, but 400 of them had already been hauled and the eye (which crabs crawl through) had been cut out of all the pots. And it wasn’t Boris Johnson who did it.”

Was it UK fishermen?

“Who else was it?” asks Cavanagh, the chairman of the Killybegs Fishermen’s Organisation (KFO) .

The organisation’s chief executive Sean O’Donoghue says he has been warning for some time about the potential for conflict between fishermen of different nationalities if there is not agreement allowing for the status quo to be retained for a period once Brexit happens.

He reckons a lot of Irish people do not realise just how close UK waters are to the coast of Co Donegal and so may not appreciate the fears of the industry.

“Can you imagine telling fishermen from Greencastle that they can no longer fish outside their back door?”he asks.

O’Donoghue says the Irish fishing industry “will fall off a cliff” if there is a no deal Brexit. He notes that over 14,000 people around the Irish coast work in fishing related industries.

Irish fishermen, just like the French, will not be happy if they are barred from areas they have fished for generations, he stressed.

“Neither Michael or I will be be able to control this, ” he warns.

Both of them believe French fishermen will be particularly militant if they find themselves barred from much of the English Channel post-Brexit, and they believe blockades at French ports will happen within 24 hours of such a scenario.

Throw into the mix strong policing by Royal Navy boats protecting UK waters and there will be “mayhem”, warns O’Donoghue.

He cites the tension between French and UK fishermen in the English Channel during the so-called scallop wars, when boats were rammed and stones thrown, as an indicator of the potential strife to come.

“Somebody will lose a life,’ agrees Cavanagh.

O’Donoghue says in a worst case scenario, those blocking French ports will not take time to check if vehicles have an Irish registration or if they are carrying fish or pharmaceuticals. “Everybody will be affected,” he says. “And it will escalate quickly to Northern ports like Rotterdam.”

Cavanagh says if things go badly, Irish fishermen will not hesitate to block Irish ports. “And there will be no point having a blockade in Killybegs. It will be in Dublin because this is about bread and butter.

At Killybegs pier on Monday, just one vessel - the Northern Ireland-registered Voyager - could be seen unloading fish, while several local boats were tied up. According to O’Donoghue, uncertainty over Brexit meant many local skippers had used up their quotas in the first three months of the year. “How could you blame them when they expected they might be barred from UK waters from April?”

Businessman Eugene McBrearty said local people were very glad to have the Voyager there because it meant a few days work for one of the the local fish processing factories , which would otherwise have been idle.

Out of his office window he pointed to one pier, where four local vessels were tied up. “That’s €150m worth of boats lying idle.”

McBrearty, owner of the KER Group (Killybegs Electrical Refrigeration Services) which provides engineering and refrigeration services to trawlers , has had to seek out new markets in places like Namibia, Chile and Saudi Arabia in the long lead in to Brexit.

The threat posed by pirates off Saudi Arabia and the need for security when operating in other Gulf states, means spreading his wings beyond Killybegs was not the exotic lifestyle choice some might imagine. But while a few years ago 80 per cent of his business was Killybegs-based, this has dropped to 40 per cent .

Liam Young , chief executive of Donegal and Wexford-based Errigal Bay shellfish processors, says that Brexit put the brakes on development at his company a long time ago.

The uncertainty has meant his company having to stall key decisions about investing in new equipment, launching new products or hiring new staff, while the slump in the value of sterling has really hurt, he says.

“We are competing with companies in the UK whose costs have fallen by 20 per cent, putting the squeeze on us,” he explains.

Young says that Errigal, which has a workforce of 150 and exports all its products , was impacted almost immediately after the Brexit referendum, but the impact became really acute when sterling started to slide.

“The last thing we want is for the uncertainty to continue. We just want it done,” he said.

Like a lot of Irish exporters, Errigal Bay uses Britain as a land bridge en route to markets in continental Europe and that is another worry as any delays when transporting fresh produce could be devastating.

Many in Donegal are also wondering what delays they will face closer to home given that those doing business in Dublin cross the border with Northern Ireland twice on the way.

“I remember well the days when I had to sit and wait at a check point in Aughnacloy for two and a half hours and you’d have to take everything out of the boot of the car,” says Cavanagh. “ Nobody wants go back to that.”