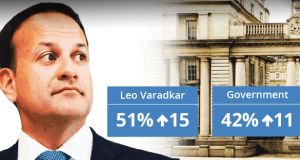 But Fine Gael maintains only a narrow lead over Fianna Fáil with the two parties looking set to compete to lead the next government.

Support for Sinn Féin has fallen to its lowest level since the 2016 general election, while there has been a substantial increase in backing for the Green Party.

Sampling for the poll was conducted from Friday to Sunday in the wake of last week’s budget and the meeting between Mr Varadkar and British prime minister Boris Johnson on Brexit.

Support for Fine Gael, if there was to be a general election, is steady at 29 per cent while Fianna Fáil declines marginally by one point to 25 per cent. All figures are compared with the last poll, carried out before the local and European elections in May.

Support for Labour and Sinn Féin also declines slightly, while support for the Green Party has doubled from 4 per cent to 8 per cent since the last poll. Independents and other small parties see their aggregate rating unchanged.

The increase in the satisfaction rating for the Taoiseach and the Government will most encourage Fine Gael as the party contemplates a possible pre-Christmas election in the event of a deal being concluded on Brexit.

Mr Varadkar sees his personal rating jump by 15 points since May, ending an 18-month long period of decline. More than half of all voters (51 per cent) now say they are satisfied with Mr Varadkar’s performance as Taoiseach, his best rating in a year.

Approval for the Government has also risen, with 42 per cent now saying they are satisfied with its performance, up from 31 per cent in May.

The approval rating for the Fianna Fáil leader Micheál Martin has risen slightly, from 35 per cent to 38 per cent, though in his case the last comparative figure dates from March.

The poll was taken on Friday, Saturday and Sunday, among a total of 1,200 voters across 120 sampling points in all constituencies. The accuracy is estimated at plus or minus 2.8 per cent at the national level.

This survey in the Republic of Ireland was conducted exclusively on behalf of The Irish Times by Ipsos MRBI, among a national quota sample of 1,200 representative of the c.3.6m adults aged 18 upwards, covering 120 sampling points throughout all constituencies in the Republic.

Personal in-home interviewing took place on 11th, 12th & 13th October 2019. The accuracy level is estimated to be approximately plus or minus 2.8%. In all respects, the survey was conducted within the guidelines laid down by AIMRO, and by ESOMAR.

Since February 2016, a question on voting importance has been included. All respondents are asked how much their vote counts on a scale from 1 to 10 where 1 means it “makes no difference” and 10 means it “makes all the difference”. Those answering 1 to this question are treated as non-voters and are excluded from our party preference calculation, along with those who don’t know how they will vote or say they will not vote.

Extracts from the report may be quoted or published on condition that due acknowledgement is given to: The Irish Times and Ipsos MRBI.