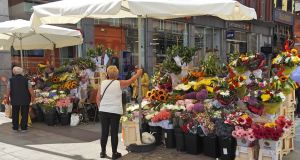 The flower stall street sellers on Grafton Street pointed out that they had been in the street much longer than Hines. Photograph: iStock

The multinational real estate which complained that flower sellers on Grafton Street were cluttering up the street has withdrawn its objections following a public backlash.

Hines Ireland, part of the Hines group which has a property portfolio of more than €100 billion worldwide, has apologised to the flower sellers.

HECF Grafton made a submission to Dublin City Council in August in which it suggested “street trading is inhibiting the flow of pedestrians in this core retail area as patrons of the street traders have to stop in the street to view the stalls”.

Instead it recommended a “centralised and focused assembly of street traders” to “reduce street clutter”.

The comments provoked a furious response from flower sellers who pointed out that they had been in the street much longer than Hines.

In response, Hines stated that it had “noted statements by Grafton Street traders and the general public in recent days in support of the retention of existing stalls located at key junctures along this much-loved street”.

It acknowledged that its submission to the draft scheme of special planning control for Grafton Street and environs had “generated concern and alarm amongst the stall owners and others”.

The company added: “This was never our intention. The submission was made in good faith with a view to improving the overall quality of the public experience along Grafton Street.

“In order to end any public confusion on this matter, we are happy to fully withdraw this proposal and will write to Dublin City Council today to that effect.

“We also apologise to the Grafton Street traders for generating unnecessary concern and would be very happy to work in collaboration with them and build positive relations into the future.”