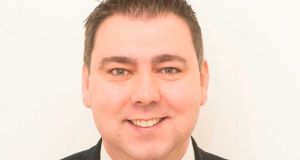 Fine Gael has recruited Cllr John Paul O’Shea with a view to having him as a running mate for Minister for Agriculture Michael Creed.

Fine Gael has moved to try and win back a seat in the Cork North West constituency by recruiting Cllr John Paul O’Shea with a view to having him as a running mate for Minister for Agriculture Michael Creed.

The party said that Mr O’Shea (34), a native of Lombardstown near Mallow, has joined Fine Gael and will serve the Kanturk-Mallow Electoral Area on Cork County Council along with Cllr Gerard Murphy, a former TD.

The move is seen as part of a Fine Gael strategy to try to reestablish its dominance in Cork, where the party won nine seats in the 2011 general election but only five in 2016.

Fianna Fáil currently holds two of the three seats in Cork North West through veteran TD Michael Moynihan, who is from Kiskeam in the northern half of the constituency, and Aindrias Moynihan, a first time TD from Kilnamartyra in the southern half.

Mr Moynihan took the final seat in the last general election ahead of Mr O’Shea, who ran as an independent and picked up 10.25 per cent of the first preference vote and also a good share of transfers. Fine Gael strategists believe Mr Moynihan’s seat could be there for the taking if Mr O’Shea is selected by party members to run in the next general election.

The new recruit would not command many votes at a Fine Gael selection convention but it is believed the party may opt to pick just Mr Creed at the convention, which would allow the party to add a second candidate to the ticket at a later date.

Cork North West runs from Charleville in the north to Ballincollig and Macroom in the south and although it also includes towns like Kanturk, Newmarket and Millstreet, Ballincollig’s large population means that there are more votes in the southern end.

A Fine Gael source said Mr O’Shea, coming from Lombardstown, north of the Boggeragh Mountains which divides the constituency, was well placed geographically to run alongside Mr Creed, who is based in Macroom in the southern end.

“There are two safe seats in Cork North West - Michael Creed and Aindrias Moynihan so we would be targeting Michael Moynihan - the constituency has almost always returned two from the south so we would see John Paul as going after Michael Moynihan who is also based in the northern side,” the source said.

Mr O’Shea was first elected to Cork County Council in 2009 and is a former mayor of County Cork.

He said he was “delighted and honoured” to join Fine Gael and he was looking forward to working with the party membership in addressing the many issues facing people in the area.