Labour, Social Democrats and Fianna Fáil have all made complaints to official bodies 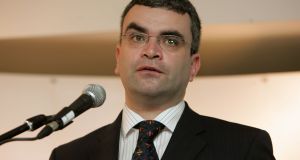 Dara Calleary: “While governments have an obligation to communicate their policies to citizens this information should not be seen as party political; nor should it contain information about potential candidates in forthcoming elections”

The Government is likely to come under fresh pressure in the Dáil on Tuesday over the advertising campaign for Ireland 2040 which Labour, the Social Democrats and Fianna Fáil have all made the subject of complaints to official bodies.

Fianna Fáil has complained to the Standards in Public Office Commission, asserting that the campaign’s promotion of Government politicians breaks the rules that civil servants should not become involved in political activities, while the Social Democrats have made a complaint to the Advertising Standards Authority.

The Labour Party and Fianna Fáil have also said that senior civil servants in the Department of the Taoiseach should be asked to appear at the Public Accounts Committee to answer questions about the campaign.

The advertising campaign has been commissioned by the Strategic Communications Unit (SCU), a 15-strong unit of civil servants at the Department of the Taoiseach with an annual budget of €5 million. However, civil servants are prevented from engaging in political activity, and Opposition parties say that the campaign breaks these rules.

“While governments have an obligation to communicate their policies to citizens this information should not be seen as party political; nor should it contain information about potential candidates in forthcoming elections. Inclusion of non-office holders is surely an unambiguous breach of the code of conduct,” the Fianna Fáil spokesman on public expenditure, Dara Calleary, wrote in his complaint to the standards commission.

Much of the anger focuses on so-called “advertorial” style advertisements which have been carried in many local and national newspapers – including The Irish Times – since the launch of the National Development Plan in Sligo 10 days ago. In many cases these advertisements resemble newspaper articles, though they are labelled as promotions by the Government of Ireland.

Many feature Government politicians prominently while promoting the benefits of the National Development Plan.

In some cases the paid-for content features non-office holders, including Fine Gael TDs, Senators and in at least one case a local councillor who is selected as a general election candidate.

The Opposition claims this work commissioned by the civil servants working in the Strategic Communications Unit in the Department of the Taoiseach is clearly political promotion of Fine Gael, and violates rules that civil servants should not engage in any political work.

However, the Government denies this, and says the content of the newspaper advertisements was largely left to the newspapers themselves, and that there was no requirement to promote Government politicians.

A spokeswoman insisted that the Department of the Taoiseach did not have final sign-off of the copy included in the advertising features. In a lengthy statement the Government also said that it had “no direct contact with regional media organisations”.

According to the statement, local papers “were advised to localise the content as they saw fit to be of interest to their audience”.

A spokeswoman said that featuring local Fine Gael politicians was a decision for each local paper.

“No political spokespeople or Government backbenchers were recommended for interview by the Strategic Communications Unit in any of the partnerships with regional media organisation; decisions about which organisations and individuals would be asked for comment was entirely a matter for each media organisation. The SCU did not sign off on the final copy,” the statement said.