CIT event to take place on Thursday, the eve of late the blues guitarist’s 70th birthday 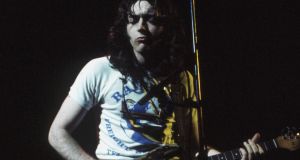 A commemorative plaque is to be unveiled in Cork to mark the 70th birthday of Rory Gallagher, the late Irish rock and blues guitarist. Photo by Debi Doss/Hulton Archive/Getty Images.

A commemorative plaque is to be unveiled in Cork to mark the 70th birthday of Rory Gallagher, the late Irish rock and blues guitarist.

The plaque will be erected at Cork Institute of Technology to remember his last ever Irish concert, which took place about 18 months before his death at the age of 47 in June 1995 following complications after a liver transplant.

Rory’s brother, Donal welcomed the decision by the college to remember performance at the inaugural CIT Arts Festival on November 18th, 1993.

“Our uncle Jim Roche had been principal at CIT and he had passed away some time before so Rory agreed to do the concert as a tribute to Jim as they were very close. Jimmy had studied in the United States and he had come back with a catalogue of songs,” said Donal.

“He brought back a lot of country blues songs- it was stuff that you didn’t hear on the radio at the time like Hank Snow and his song I’m Moving On. Rory and Jimmy were very close so he put I’m Moving On on the first Taste album as a subtle tribute to Jimmy.”

Donal recalled that Rory was extremely nervous before headlining at the CIT Arts Festival as he had did not think the college’s atrium would lend itself to a full rock band and he was not accustomed to playing a full acoustic set even though he thought it a more appropriate way to honour his uncle.

“I think he felt a full band rock concert would have been too raucous as a tribute to Jimmy but he was a bit daunted at the prospect of doing a set on stage by himself so he brought over Lou Martin to play piano and Mark Feltham joined in as well on harmonica so it was quite the night.”

Donal said he was pleased that CIT had opted to mark the 70th anniversary of Rory’s birth on March 2nd, 1948 in Ballyshannon, Co Donegal by inviting Belgian acoustic guitarist Jacques Stotzem to perform songs from his tribute album, To Rory, at CIT on Thursday at 1pm.

Stotzem is also playing at an event at the Rory Gallagher Music Library at Cork City Library on the Grand Parade at 7pm on Thursday where journalist Garth Cartwright will talk about Gallagher and his music.