The National Emergency Coordination Group for Severe Weather has been meeting as the country braces for one of its coldest weeks in years. The weather system is expected to bring freezing temperatures and heavy snow. Video: Bryan O'Brien 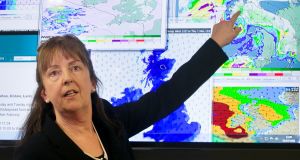 Preparations are being put in place across the country as

6cm of snowfall is expected over the next 24 hours, with the possibility of schools closing later in the week.

Met Éireann said there was the risk of a “status red” snow warning being issued for Thursday and Friday as Storm Emma descended upon Ireland.

Minister for Housing, Planning and Local Government Eoghan Murphy said if a status red warning was issued it would lead to “automatic schools closure”.

“If we were to see a status red issued for Thursday for the south and east, that would lead to school closures because of public transport closures, and at that point in time we would be giving other advice as to what we’ll be recommending in terms of people travelling to and from work.”

A status orange snow and ice warning is in place for Dublin, Carlow, Kildare, Laois, Louth, Wicklow and Meath from today at 3pm until tomorrow at 11am.

Scattered snow showers are expected to bring accumulations of 4-6cm by tomorrow morning, with widespread frost and icy conditions.

Grass Min Temperatures recorded overnight at some of our weather stations. pic.twitter.com/GkcDuYOkCA

A status yellow snow and ice warning has also been issued for Kilkenny, Longford, Wexford, Offaly, Westmeath, Cork, Tipperary and Waterford, with accumulations of up to 3cm of snow in some parts by tomorrow morning.

A “significant snow event” with possible blizzard conditions is forecast for Thursday evening. If a red warning is issued it will happen 48 hours in advance.

The worsening weather has already led to the cancellation of a number of flights into Dublin today. Aer Lingus has been asked by the Heathrow Airport Authority to reduce its schedule due to the severe weather conditions which are likely to affect a number of airports.

Supermarket chains are increasing supplies of bread and other essential foodstuffs amid evidence of widespread panic buying in advance of the snow.

Shoppers across the country reported difficulties in buying food items due to a massive increase in demand.

Tesco Ireland said it had worked with its suppliers to ensure a 20 per cent increase in availability of fresh bread.

“We’re also increasing stock levels of fresh produce, including milk, with extra deliveries arriving this evening and throughout tomorrow,” a spokesman said yesterday.

The National Emergency Co-ordination Group for Severe Weather said it would meet at least once a day for the rest of the week. Seán Hogan, chairman of the group, urged the public to monitor Met Éireann’s weather forecasts and warnings for the coming days.

The ESB said damage “may occur” to the electricity network, and it had a full emergency response in place to address any power outages.

Fire services and the Civil Defence are on standby.

Transport Infrastructure Ireland (TII) said it has 120,000 tonnes of salt, about four times the amount used during the winter of 2010.

Seán O’Neill, director of communications at TII, said “a lot of regional roads might not get salted or ploughed”.

“The national network is critical; that’s where we’ll be focused and local authorities will be focused. Additional rural road networks are going to be difficult to deal with.”

Noise pollution affects animals’ communication with each other – research