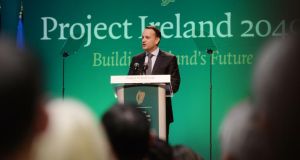 Sipo, the State’s ethics watchdog, has been asked to investigate if the Government’s publicity campaign to promote Project Ireland 2040 has broken rules that bar civil servants from political work.

Fianna Fáil has written to the Standards in Public Office Commission seeking an investigation into whether the publicity campaign, which involves extensive advertising in local and regional newspapers, breaks Civil Service rules or contravenes ethics legislation.

The Social Democrats, meanwhile, have complained to the Advertising Standards Authority for Ireland, claiming that the Government campaign has breached the principles of the advertising code, which calls for advertisements to be “legal, decent, honest and truthful”.

Following the launch of the National Planning Framework and the National Development Plan in Sligo this month, the Government embarked on an extensive publicity campaign that has had a particular focus on cinema advertising and advertisements in the form of paid-for newspaper articles.

Many of the articles have promoted Government politicians, and some have promoted non-office holders, such as Senators, TDs and, in at least one case, a councillor who is a Fine Gael candidate in the next election. Independent ministers have also been promoted, with one advertisement referring to the junior minister Kevin Boxer Moran as the King of the Midlands. Opposition parties say this amounts to publicly funded political advertising for Fine Gael candidates.

The advertising campaign is being commissioned by the strategic-communications unit, a 15-strong unit of civil servants in the Department of the Taoiseach with an annual budget of €5 million.