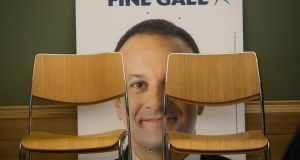 Taoiseach Leo Varadkar has suggested to union leaders that Fianna Fáil proposals could see a pay freeze being introduced for more than 300,000 staff across the public service from next year.

In an email to head of the public service committee of the Irish Congress of Trade Unions Kevin Callinan on Monday afternoon, Mr Varadkar maintained Fianna Fáil had not set out any money for a new public service pay accord. He suggested this could result in a pay freeze from next year, leading to staff departing from the public service and widespread industrial relations conflict.

Fianna Fáil has rejected the comments as “nonsense” .

Fianna Fáil finance spokesman Michael McGrath said it was deeply unwise of Fine Gael to be trying to prod other parties into a pre-election auction in relation to public service pay before negotiations with unions had even commenced.

He said Fine Gael should remember the comments of the party’s former minister for finance, Michael Noonan, before the 2016 election that no one in his position would reveal a negotiating position in advance by providing an upfront figure.

Mr Varadkar said Fine Gael had allocated €2 billion over four years to 2025 for a new public service pay deal. He asked Mr Callinan to bring this to the attention of members.

He also asked Mr Callinan, who is head of the largest public service trade union, Fórsa, to advise members that Fianna Fáil had not allocated “a single cent” for a new public service agreement over the coming five years in its manifesto.

Fórsa said allocation for public service pay put forward by the two largest parties in the election campaign would suggest annual increases of, at most, between 1.3 per cent and 2.1 per cent.

The union said this was at a time when the Central Statistics Office had maintained that average private sector earnings rose by nearly 4 per cent in the year to September 2019, and when experts, including the union-backed Nevin Economic Research Institute, were predicting annual wage growth of 3.5 per cent or more in the coming years. “We would be facing into a very difficult negotiation if both the main political parties are budgeting to hold back real public service wages for another half-decade.”

Labour Party sources said on Monday that it was “bizarre that both Fianna Fáil and Fine Gael had put a figure on how much they would spend on a new public service pay deal deal before talks had even begun.

“Priorities for the Labour Party will include ending both pay inequality for new entrants, and the two-tier pay system for school secretaries and caretakers, and allowing Defence Force representative bodies to affiliate to the Irish Congress of Trade Unions and a seat at the table in pay talks with a review of pay and allowances for serving members to ensure retention of skills.”