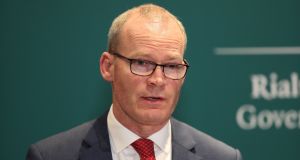 Tánaiste Simon Coveney has warned of the need for a new government to tackle Covid-19. Photograph: Nick Bradshaw/The Irish Times

Tánaiste Simon Coveney has warned of the need for a new government to tackle Covid-19 and that Irish society needs to brace itself for a lot worse to come.

“This is not nearly over,” he said as he called for a new government that is “strong and stable. One that is realistic, ambitious and diverse.

He said part of his priority “now must be finding a way to work with others to design a basis for a government that can command a lasting majority in the Oireachtas”.

Opening Friday’s Seanad debate on the swathe of emergency measures passed by the Dáil on Thursday night, Mr Coveney said “this invisible enemy is just beginning to spread through our country and our people”.

But he added that “we also know from the experience of others that we can act and those actions can make a huge difference to the spread of this virus and save thousands of lives”.

Stressing the need for a new government to combat the pandemic he said Fine Gael and Fianna Fáil are working together “through our negotiating team, to shape a process that I hope will encourage others to join us in designing a diverse but stable government with a credible mandate not only to lead us through this emergency but also to focus on reimagining and reshaping Ireland for the better as we emerge on the other side.”

He said they needed a government that “not only makes the right decisions now in the face of a pandemic, but is also planning for a recovery that can inspire hope and a confidence that we will emerge stronger and more united as a country from this, able to look to the future with optimism based on a clear path forward”.

Earlier the Seanad stood to applaud frontline workers for a minute, echoing the tribute of their Dáil colleagues.