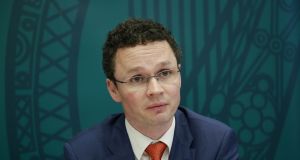 Minister of State for the OPW Patrick O’Donovan said: ‘You have to allow people to object... but there also has to be an end game’. Photograph: Nick Bradshaw/The Irish Times

Climate change is occurring at such a fast rate that the Government will have to look at ways of speeding up the delivery of major flood relief projects while still respecting people’s right to object, Minister of State with responsibility for the Office of Public Works (OPW) Patrick O’Donovan has said.

“Climate is changing faster than policy. We are now seeing monsoon like weather in the month of August. We had seven towns being inundated with water in a short time last month and it’s unprecedented and the reality for a lot of communities is that time is running out.

“We have to examine the planning processes that are in place and we have to ask ourselves is the process currently in place for the delivery of large infrastructure projects such as that for cities like Cork and Limerick fit for purpose?”

Mr O’Donovan was speaking during a visit to Cork on Wednesday where he met OPW officials and Cork City Council chief executive Ann Doherty to discuss the €150 Lower Lee Flood Relief Scheme (LLFRS). It was drawn up in the wake of 2009 flood which inundated much of the city centre.

The proposed OPW scheme to prevent any repeat of that 2009 flood has met with opposition from a campaign group, Save Cork City. The group claims that the OPW plan is too dependent on building walls which will limit access to the River Lee and will fail to protect the city from flooding.

The campaign group has mounted a number of legal challenges to Cork City Council’s €6 million Morrison’s Island Public Realm Project, which incorporates part of the OPW scheme to protect the area from flooding from the south channel of the Lee.

Save Cork City mounted a legal challenge in 2019 to the Morrison’s Island Public Realm Project which forced the city council to submit a new planning application to An Bord Pleanála which granted planning for the project last June.

But Save Cork City has since appealed to the High Court for leave to seek a judicial review of the An Bord Pleanála decision. The High Court is due to rule on November 3rd on whether or not the campaign group can proceed with the legal challenge.

Mr O’Donovan stressed during his visit to Cork, where he met with businesspeople affected by the 2009 flood that he fully recognised the right of people to have an input and to object to an OPW scheme as often such inputs could lead to improvements in the schemes.

“You have to allow people to object, you have to give people an opportunity to have an input, and engage with their councillors and challenge the situation as, many times, it will make it better but there also has to be an end game and the end game has to come at some stage soon.”

Mr O’Donovan said that he had genuine concerns that further delays to the Cork LLFRS would not only increase the risk to both homeowners and business people living and working on the flat of the city but also increase the risk of people losing their lives in the event of a major flood event.

“I worry that there is another event like 2009 where you had a high tide, a fluvial event with fast runoff and south easterly winds, you can get catastrophic damage here in Cork and the biggest thing I worry about is the potential loss of life.”

Mr O’Donovan, who was accompanied by Lord Mayor of Cork, Cllr Joe Kavanagh and Cork City Council CEO, Ann Doherty during his walkaround in the city centre, also met with both Cork Chamber and the Cork Business Association who are both strongly backing the OPW plan.

Cork Chamber President Paula Cogan said the OPW plan had been extensively consulted on and the first phase of the LLFRS would protect properties in the area from 70-80 per cent of tidal flooding, “providing business and community resilience in the face of increasingly occurring extreme weather events”.

Earlier this month, Ms Doherty warned that city centre traders had a lucky escape on the night of August 20th, saying that if it were not for a change of wind direction from south easterly to southerly, Princes Street, Pembroke Street and Cook Street would have been badly flooded.

Writing in The Irish Examiner, she strongly criticised Save Cork City, saying that businesses, hanging on by a thread due to Covid-19, were now facing the prospect of further legal challenges from the group which is preventing work starting on a solution to the flooding.

But Save Cork City rejected Ms Doherty’s criticism and its spokesman, John Hegarty told The Irish Examiner that Ms Doherty was personally responsible for any delay in protecting Cork from flood waters by “refusing to discuss a change of approach or seek independent advice”.

Save Cork City said a statement in support of its legal action that it had become “increasingly clear that there are more beneficial ways to protect Cork from flooding” and “a forced and flawed flood defence scheme that would damage Cork for generations cannot be the way forward”.

“Three options of a tidal barrier have been presented in proposals that cost up to a third less than the OPW flood walls and embankments and could protect up to 16,000 potential properties including the entire Dockland area,” added the group.