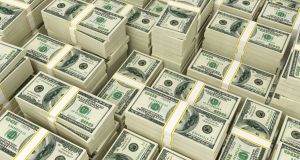 The transfers were part of a total of slightly more than $1bn which went to the Russian-Cypriot company between 2010 and 2015. File photograph: Getty

A fund that is listed on the Dublin Stock Exchange transferred $23.5 million (€20 million) to a company which a major US bank later became concerned might be linked to a notorious Russian gangster, according to a leaked report seen by The Irish Times.

The report was filed in September 2015 by JPMorgan Chase Bank (JPMC) in Columbus, Ohio, to the Financial Crimes Enforcement Network (FinCEN), a bureau of the US Treasury in Virginia.

Two transfers from Omega Trust Umbrella Fund plc were made in June and October 2011, from Morgan Stanley & Co International, to a JP Morgan account in London belonging to a company with addresses in Russia and Cyprus.

The transfers were part of a total of slightly more than $1 billion which went to the Russian-Cypriot company between 2010 and 2015, according to the report. The transfers were identified as going through the London bank and other banks with which the US bank had a correspondent relationship.

The company was a client of the London bank between 2002 and 2013. After the account was closed, the US bank became aware of negative publicity that associated the former client with Semion Mogelivich, “an individual on the FBI’s Top Ten Most Wanted list”.

This prompted the bank to review its files on the suspect company, and to file the Suspicious Activity Report (Sar), which named a number of counterparties as suspect entities.

The Dublin fund is listed as one of the five largest remitters of funds to the former customer.

“Please note that Omega Trust Umbrella Fund is not being named as a suspect in part one of the Sar, as it is operating as a correspondent bank. However JPMC is unable to discern the true remitter of the funds and is therefore highlighting the transactions.”

The report did not elaborate.

The report went on to note the fund “operates as a subsidiary of Gazprombank”, one of Russia’s largest banks.

A request for a comment on the Sar was sent last week to Omega Trust Umbrella Fund by way of its legal advisers in Dublin, but there was no response at the time of going to press.

Mogelivich is a Ukrainian-born Russian organised crime boss that the FBI has called “the most dangerous mobster in the world”.

The Omega Trust fund was incorporated in 1996 and is still an active fund. It is associated with the Russian Opportunity Fund, which has as its objective the generation of the maximum possible return from securities in Russia and other Commonwealth of Independent States (CIS) countries.

The directors of the Omega Trust fund include Bernard Loze (73), a French national who was given an Order of Friendship award by the Russian president, Vladimir Putin last year.