Family of tourists killed in Kerry arrange US repatriation of ashes

Remains will be flown to Phoenix, Arizona following cremation service in Co Cork 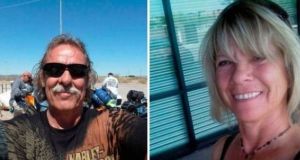 The family of two tourists killed in a freak pony-and-trap accident in the Gap of Dunloe in Co Kerry this week have begun making arrangements for the repatriation of their ashes to the US.

A cermony was held at the Island Crematorium in Ringaskiddy, Co Cork at midday on Thursday.

American tourist Joy Few (64) and her Canadian partner Normand Larose (62) were fatally injured when they were thrown from a pony and trap into a rocky ravine some two miles from Kate Kearney’s Cottage in the Gap of Dunloe at about 2pm on Monday.

Ms Few, who worked as a research supervisor at a hospital in Phoenix, Arizona, and Mr Larose, who worked in construction in Phoenix, were on holiday in Ireland with Ms Few’s daughter Tonya Tier and her husband Bill Walthers, and their children Caitlin (15) and Gavin (8).

Ms Tier and her husband and children were travelling in a separate pony and trap behind Ms Few and Mr Larose down through the Gap of Dunloe. Although they did not witness the incident, they did come upon the scene as rescuers tried to get to the injured couple.

According to informed sources, Ms Tier and her family have been deeply moved by the support and sympathy shown to them. Pony men held a prayer service at Kate Kearney’s Cottage, and Mayor of Killarney Niall Kelleher opened a book of condolences for the family.

Following completion of postmortem examinations on Ms Few and Mr Larose at University Hospital Kerry, Ms Tier and her husband arranged with a local undertaker for the remains to be brought to the Island Crematorium at Ringaskiddy in Cork Harbour for cremation.

It’s understood that Ms Tier and her family, who have been supported by a Garda family liaison officer over the past few days, will bring the ashes back to Phoenix in the US for a funeral service there with relatives and friends next week.

Supt Flor Murphy of Killarney Garda station, who is leading the investigation into the incident, said people in Killarney were still deeply shocked by the tragedy as gardaí continue to try to piece together exactly what happened.

It’s understood Ms Few and her partner and family had taken a boat from Ross Castle on the Lower Lake up through the Middle Lake to Lord Brandon’s Cottage on the Upper Lake, and were returning down through the Gap of Dunloe when the incident happened.

He said gardaí were anxious to speak to anyone who may have witnessed what startled the horse or caused it to bolt, resulting in the trap hitting an embankment and catapulting Ms Few and Mr Larose into the ravine where they were fatally injured.

The pony man driving the trap, a man in his 40s from Kilgarvan, managed to jump clear and avoid injury, but was taken to University Hospital Kerry where he was treated for shock before being discharged. Gardaí hope to speak to him over the coming days.

The horse also ended up in the ravine and had to be put down by a local vet. Gardaí requested the assistance of Kerry Mountain Rescue volunteers to help recover the bodies.