Family appeals for driver in hit-and-run to come forward 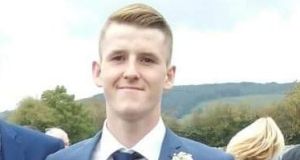 David Kelly (21) was seriously injured in a hit-and-run in Co Limerick.

The family of a young man seriously injured in a suspected hit-and-run in Co Limerick have appealed to the driver of the vehicle involved to come forward.

His family fear he may have suffered brain damage but are hoping he will make a full recovery.

The young garden centre worker and part-time barman was found “lying in a pool of blood in the middle of the road” about one kilometre from his home, at Carrigeen, near Croom, Co Limerick, around 2.30am on Monday.

He was lying in the middle of the road after the collision when his aunt, Joanne Kelly, who was travelling home from a night out with friends, discovered him.

She was accompanied by two friends, one of whom is a trained nurse and gave Mr Kelly life-saving roadside medical attention.

“It was frightening to see; it was a horrific scene,” another uncle, Brian Kelly, said.

Mr Kelly was injured while walking home alone after a night out with friends to celebrate having recently passed his driving test.

Conn Kelly added: “His head is our big worry. He is sedated now of course, but he’s badly injured; he was in a lot of pain.

“He lost a substantial amount of blood. We’re hoping he’ll make a full recovery, but we don’t know. We’re hoping there is no brain damage,” he said.“It was a shock seeing him in such a state, on a wet country road . . . to be thrown down like that.

“Whoever did this just left him there. You wouldn’t do it to a dog.

“I’d appeal to their conscience, and come out and man up.” Fighting back tears, he added: “They should have made a 999 call.

“Someone knows something and someone knows who did it. There [has to be] some [vehicle] damaged somewhere.”

He also appealed for mechanics working in garages or repair shops, who may have information about the vehicle involved, to “make an anonymous call to the gardaí if needs be”.

Gardaí at Newcastle West have appealed for anyone with information to come forward and help their investigation.