‘He was always in very good form’: Kenny praised on last day

Enda Kenny has said he has been “proud and privileged” to serve as Taoiseach for so many years as colleagues paid tribute to him on his last day in office. Video: Mary Minihan 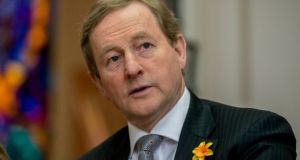 Enda Kenny has said he has been “proud and privileged” to serve as Taoiseach for so many years as colleagues paid tribute to him on his last day in office.

Mr Kenny was speaking as he went into his final Cabinet meeting in the position.

“While it may be a milestone for me personally, in the context of the country that’s irrelevant,” he said.

“So it’s business as usual. We have many challenges up ahead.

“I’m proud and privileged to have been able to serve as Taoiseach for all these years.”

Asked as he entered Government Buildings if today was a sad day for him, he said: “No”.

Minister for Foreign Affairs Charlie Flanagan praised Mr Kenny for convening a “war Cabinet” in 2011 and ensuring the public finances were brought back in order.

He said Mr Kenny was an excellent chairman of Cabinet meetings and always collegiate and mindful of others’ views.

She highlighted his July 2011 speech in which he criticised the Vatican in the aftetmath of the Cloyne report.

“For a believer to have made that speech was really a defining point I think and it showed great courage.”

She also paid tribute to Mr Kenny’s family for their “unstinting support”.

Minister for Health Simon Harris said “today was very much Enda Kenny’s day” and praised the outgoing Taoiseach for his “stellar” performance.

“On a personal level I’m extraordinarily grateful to Enda Kenny for the opportunities he’s given me to serve.”

Mr Coveney praised the outgoing Taoiseach for changing his views on marriage equality, “and managed to change a country’s view as well”.

He said the country had a lot to thank Mr Kenny for.

“He’s been an optimist. He’s been someone with extraordinary energy. . . I think he’s been a great leader. He will go down as one of the best taoisigh that this country has ever had.”

Mr Kenny’s planned resignation on Tuesday will pave the way for Leo Varadkar to be elected on Wednesday.

Mr Kenny will host his final Cabinet meeting on Tuesday morning after six years as head of the Government. The Dáil will hear a series of farewell speeches from across the House.

His successor, Mr Varadkar, will be appointed at midday on Wednesday, with support from 58 TDs including Fine Gael, the Independent Alliance, two Independent Ministers and Independent TD Michael Lowry.

Fianna Fáil has confirmed it will abstain in the vote, ensuring Mr Varadkar’s elevation.

Mr Varadkar will then confirm his reshuffled Cabinet in the Dáil at 6pm on Wednesday with minimal changes expected.

“I think he has the potential to be a superb leader of this country and I wish him all the very best,” Mr Harris said.

He said the make-up of the new Cabinet was entirely a matter for Mr Varadkar.

“I don’t envy the decisions he has to make. They’re difficult decisions and they’re among some of the most important decisions a Taoiseach makes, putting their team together,” said Mr Harris.

“I will entirely respect whatever he decides to do and I will keep working as hard as I possibly can until I’m told otherwise.”

Two Ministers of State, Eoghan Murphy and Michael Ring, are expected to be appointed to Cabinet, while Government Chief Whip Regina Doherty is expected to be allocated a senior ministry.

Speculation has continued on other potential changes, with Mr Flanagan touted for a possible move to the Department of Justice.

Mr Coveney is understood to be seeking a move to the Department of Foreign Affairs to oversee the Brexit negotiations.

Mr Flanagan, who served as Fine Gael spokesman for justice in opposition, is keen to remain in his current portfolio but has been linked to replacing Ms Fitzgerald in justice.

Other names linked to the Department of Justice include Minister for Education Richard Bruton.

However, those close to Mr Bruton have stressed his desire to remain in education or move to an economic portfolio.

It is also expected Attorney General Máire Whelan will stand aside this week to allow for Mr Varadkar to make a new appointment. The Irish Times understands Frank Callanan is in line for the position. Mr Callanan is a member of the party’s trustees and is seen as a strong supporter of Mr Varadkar