Failure to cut 13.5% VAT rate a ‘nail in the coffin’ for Border hospitality businesses

Mixed reaction in industry for stimulus package, with many saying it misses target 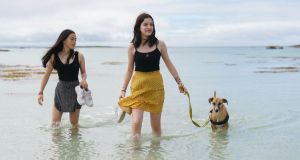 Aoife Tynan (13) and Amelie Veale (13), from Dublin, enjoy a paddle while on staycation near Carna, Connemara. Photograph: Fran Veale

The Government’s €125 “staycation” tax voucher may help to extend the tourist season, but the failure to cut the 13.5 per cent VAT rate is a crippling blow to the tourism and hospitality trade, businesses have argued.

From September, people can qualify for a €125 tax rebate if they spend at least €625 on accommodation, food or non-alcoholic drinks, with consumers able to upload their receipts to an app on their phone in order to claim.

Despite strong lobbying, however, the bid by the tourism trade for the 13.5 per cent VAT rate to be cut to match the 5 per cent rate now applying in Northern Ireland failed – an outcome strongly criticised by Adrian Cummins, chief executive of the Restaurants Association of Ireland.

“By not decreasing the rate, in line with our EU counterparts and closest neighbour, [the] stimulus has put a nail in the coffin for Border restaurant and hospitality businesses competing with a 5 per cent rate in Northern Ireland,” he said.

While the extension for the Wage Subsidy Scheme and the rates waiver were welcomed, the “staycation subsidy” got a mixed reaction from some businesses who fear it may come too late in the year to woo domestic customers.

Welcoming it, Joe Dolan, owner of the Bush hotel in Carrick-on-Shannon, said his season ends abruptly. “We go over a cliff at 3pm on the last Sunday in August every year. We can time it to the hour.”

Pat Rigney, the owner of Leitrim-based Shed Distillery, producers of Drumshanbo Gunpowder Gin and Drumshanbo Single Pot Still Irish Whiskey, was hopeful too, believing it could extend the season.

“This is really good news,” he said. “I think a lot of people have not yet taken holidays – they were in lockdown and then they were hoping to go overseas. I think September and October could be very busy.”

Saying a verdict on the voucher is months away, Galway restaurateur JP McMahon said his Cava restaurant’s 40 seats are currently full. “We cannot do any more customers. I think it will help rural businesses more.

Welcoming the wage subsidy extension, Ciaran Reidy, a director of Lough Rynn Castle Hotel in Co Leitrim, warned, however: “There’s no point in a wage subsidy scheme to keep staff if we don’t have the business coming in.”

Mr Reidy said that Lough Rynn and its sister hotel Kilronan Castle in Co Roscommon had lost significant business, and the failure to reduce the VAT rate is hugely disappointing.

“We are a Border county and 30 minutes away the VAT rate is 5 per cent” said Mr Reidy, “Customers will not be coming here from Fermanagh and other places. In fact, the traffic will be going the other way,” said Mr Reidy.

Expressing “disappointment” with the overall package, he said luxury hotels such as Lough Rynn and Kilronan Castle had effectively been rendered “glorified B&Bs” because of the 50-person Covid restrictions.

Eamonn O’Reilly, who owns the Michelin two-star restaurant The Greenhouse and One Pico in Dublin, said he was “devastated” that the lower VAT rate was not cut. “There will be so many more closures because of this,” he said.

Meanwhile, Ross Lewis, owner of Chapter One, another of Dublin’s Michelin-starred restaurants, said he did not think the package is enough. “After 35 years I feel very disappointed,” he said.

Shane Mitchell, who owns Dublin restaurants the Asador and Prado, was equally critical. “We had hoped for a lot more from the Government, but this stimulus package misses the target,” he said.