‘Everyone should remember his name, because he has sacrificed so much’ 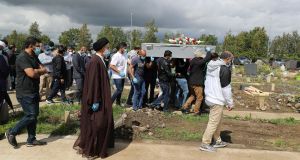 The world has now found out that Dr Syed Waqqar Ali, the eighth member of the Irish health service to die from Covid-19, is a hero, but his family had known that always, said his daughter, Dr Sammar Ali, speaking after his funeral.

Mourners gathered at the Newcastle Muslim Cemetary in west Dublin to pay respects to Dr Ali, on a day that would have been his 60th birthday. He died on Wednesday after a three-month battle with Covid-19.

A locum at the Mater hospital, Dr Ali lived in Tyrellstown, west Dublin, having moved to Ireland 20 years ago, and is survived by his wife, Rubab, and his five children, Sammar, Arslan, Salman, Jarrar, and Zahra.

Rain cleared for the outdoor ceremony, where prayers and songs were amplified by a small speaker, to allow for social distancing. Closely following Covid-19 restrictions, the 60-strong crowd wore masks, with many wearing gloves.

As is customary in the Islamic tradition, only men attended the burial. Following the ceremony, Dr Ali’s children spoke to The Irish Times. His daughter, Dr Sammar Ali, recently qualified as a doctor.

“People are only finding out now that he’s a hero, but he’s been a hero to us our whole lives. He’s gone above and beyond for his patients, for his family, for his parents, for his sisters, for their children,” she said.

Losing their father to the virus has encouraged his children to speak out, said his daughter: “The only way people will understand is if Covid hits them as hard as it hit us.”

Urging people to realise the severity of the disease and that their actions could risk the lives of others, she said: “If you’re not going to do it for yourself, do it for your loved ones, because life is really precious.”

Their father had spent three months in the Mater where he was tended by many of the people with whom he had worked: “We thank all of them at the ICU at the Mater hospital, they gave him exceptional care,” Salman said.

Meanwhile, staff at Our Lady’s Hospital, Navan observed a minute’s silence at noon to honour Dr Ali, who had worked at the hospital for many years as a locum emergency department registrar.

Describing him as “an esteemed colleague”, hospital manager Ken Fitzgibbon said: “He is fondly remembered as a true gentleman and colleague to the staff in ED here in Navan.”

The Irish Hospital Consultants Association said “Dr Ali’s tragic death at a young age reminds us once more of the sacrifices made by frontline healthcare professionals, particularly at this time.”

Describing him as an “exemplary medical professional with an immense dedication to public service”, the association said his expertise, care and warmth had “made an impression with patients and colleagues alike”.