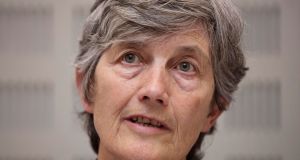 Deputy Catherine Connolly’s team estimated that around 15 Government TDs voted for her in the secret ballot. File photograph

Independent TD Catherine Connolly is the new Leas Cheann Comhairle of the Dáil after a shock victory over Fine Gael candidate Fergus O’Dowd.

The Galway West deputy is the first woman to hold either the role of Ceann Comhairle or Leas-Cheann Comhairle in the 101-year history of the House, winning by a margin of 77 votes to 74 in a secret ballot.

The result marked the first Dáil defeat for the Fianna Fáil-Fine Gael-Green Party coalition and is being seen as an embarrassment given its majority in the House. An estimated 15 Government TDs voted against Mr O’Dowd.

Ms Connolly received a standing ovation from her colleagues on Thursday night when the result was formally declared. Ceann Comhairle Seán O’Fearghaíl described her election as “historic” and a great occasion and acknowledged the “distinguished” campaign run by Louth TD Mr O’Dowd.

Ms Connolly (63) and Mr O’Dowd (71) were the only two nominees. The position usually goes to the Opposition but Mr O’Dowd, who had the nomination of the coalition parties, had been expected to win.

Speaking before the formal declaration, Ms Connolly said it was an “absolute privilege” to be appointed to the job. She said she expected to finish a “good second” with support from the opposition parties rather than to win.

Ms Connolly had decided to run because “we complain about gender inequality” and there was only one other, male ,candidate.

Opposition TDs were surprised at the outcome given the coalition’s numbers, which did not hold up in the secret ballot. There was speculation about a mutiny in the Fianna Fáil ranks, with one of the party’s TDs saying “the Government didn’t bring out the government vote” and that the defeat was “worrying given the need for stability”.

Some Fine Gael TDs were said to be unhappy that those who selected Mr O’Dowd as the candidate had overlooked Bernard Durkan. The Kildare North TD, known as the ‘father of the Dáil due to having the longest record of service, regularly stands in as acting chair in the House.

Taoiseach Micheál Martin said he was “disappointed that Fergus didn’t get elected because I supported him”. He said it was a secret ballot which “speaks to the autonomy of the parliament.

“Parliamentarians will decide in terms of the Ceann Comhairle and Leas-Ceann Comhairle,” he said. “But I can’t speculate any further than that...I think it’s parliament taking its decision. I’m disappointed for Fergus, he’s a very experienced parliamentarian. I wish Catherine the very best. She’s an able chairperson as well.”

With 151 of 159 TDs voting, it emerged that two Government TDs were unable to attend because of government business and were “paired” which meant two opposition TDs agreed not to vote. A fifth TD was absent for health reasons and three other TDs did not vote .

Voting took place at the Convention Centre in Dublin, where the Dáil is sitting on some days to allow better social distancing amid the pandemic. The role carries an additional allowance of €38,787 on top of a TD’s salary of €96,189.

A Government TD who planned to vote for Mr O’Dowd said they changed their mind after being “struck” by Ms Connolly’s comments about there never having been a female Ceann Comhairle or Leas Cheann Comhairle.

Ms Connolly has been a TD since 2016. She was a councillor from 1999 until her election to the Dáil, serving as mayor of Galway.

Mr O’Dowd, a TD since 2002, is a former minister of state, senator and councillor who served three times as mayor of Drogheda.

1 Covid-19: Taoiseach warns of restrictions in Ireland’s cities as hospital cases pass 100
2 Aer Lingus staff say they are living in ‘near poverty’ and unable to cover rent
3 Focus on cross-border movement as Donegal prepares for Level 3 restrictions
4 Terror investigation launched after two wounded in Paris knife attack
5 Séamus Woulfe: The last man standing in Golfgate is set to learn his fate
Real news has value SUBSCRIBE