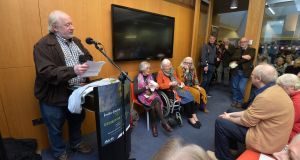 Paddy Smyth speaking at an event for his mother, author Jennifer Johnston, who celebrated her 90th birthday at DLR Lexicon library in Dún Laoghaire and the opening of an exhibition of her work. Photograph: Alan Betson

The author Jennifer Johnston, who turned 90 earlier this month, celebrated her birthday on Saturday at DLR Lexicon library in Dún Laoghaire with the opening of an exhibition on her life and work.

Ms Johnston has won a number of awards for her writing, including the Whitbread Book Award for The Old Jest in 1979 and a Lifetime Achievement prize from the Irish Book Awards in 2012. The Old Jest was later made into a film called The Dawning, starring Anthony Hopkins.

The opening of the exhibition, undertaken in partnership with her family, was attended by Ms Johnston’s sons Paddy and Malachi, daughters Sarah and Lucy, and grandson Attikos Lemos Smyth.

Last year, Ms Johnston donated her writing desk and nearly 2,000 of her books to DLR Libraries. Her book collection includes numerous translations of her novels and signed gifts received from many fellow writers, dramatists and artists. The exhibition runs until March 31st.

She donated her archive to Trinity College Dublin, which also houses the archive of her father, Denis Johnston.