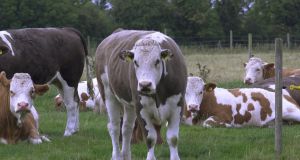 Irish beef exports to the United Kingdom will be devastated by the supply of even limited amounts of high-quality South American beef, says IFA chairman. Photograph: Ruth Hauge

Irish beef exports to the United Kingdom will be devastated by the supply of even limited amounts of high-quality South American beef, the Irish Farmers’ Association has warned.

Calling on the European Commission to protect the Irish beef industry from the impact of UK tariffs, the IFA livestock chairman, Angus Woods said a no-deal Brexit will leave Irish farmers in “a very difficult” place.

The idea that Irish farmers and Irish businesses “would be able to pay a tariff and compete with the likes of South American goods into the UK market just wouldn’t work,” he told RTÉ’s Morning Ireland.

“It doesn’t take a whole lot, targeting 50, 60 container loads of the high value steak cuts into the UK market would be enough to drag the whole market base down and make it unviable for Irish farmers in the UK market,” he warned

Prices have fallen even of market nervousness even in advance of March 29th, the IFA representative said: “The concept that we would be able to access the market after paying tariffs into it would certainly not work.”

Sending Irish beef exports from the Republic to the UK market through the Larne-Stranraer landbridge, rather than Dublin/Holyhead, or Rosslare/Pembroke will not work, he said.

“We need the Commission to recognise that any interference with that trade into the UK would have a huge negative impact right across the whole European Commission and not just an Irish beef problem.

Some rules must be found to ensure that Irish beef going to the UK are not affected by tariffs, he said, citing as precedent regulations currently covering New Zealand lamb quotas to the EU.

Currently, such New Zealand exports are divided up between the UK and the rest of the EU and granted partial quota-free access, so, if applied to Ireland, it would ensure that the majority of UK-bound Irish product would be covered.

“This is the great problem; the beef sector has clearly had a massive impact right up until now. Irish farmers unfortunately have been left in a position where they haven’t been able to manage their risk leading into Brexit.

“In most other sectors you could see a position where businesses could forward sell or to fix prices coming into it, the Irish beef farmer has had to take a spot price for their beef,” he went on.

However, Irish beef farmers have been unable to cut risks and are “in a really, really difficult position”, Mr Woods declared, but he warned that Irish suffering would end up being shared across the EU.

“(It would) spread right across the European beef market which is already under pressure at the moment, this has a much wider, broader knock on effect right across continental European market.

“You’re also going to see the likes of pig meat, there’s almost a million tonnes of pig meat into the UK. That in itself would also be displaced across the European markets. It has a huge knock-on effect.

“It’s clearly very much the Commission who are going to have to step up and sort out a mechanism which is first of all going to ensure access into the UK market and then avoid any unnecessary damage done to Irish producers.”