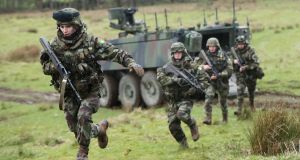 Members of 59th Infantry Group take part in a mission-readiness exercise at Coolmoney camp in Co Wicklow as they prepare for deployment to Syria. Photograph: Niall Carson/PA Wire

Four High Court cases taken by the Defence Forces’ rank-and-file representative organisation, Pdforra, have been adjourned following an unexpected offer of mediation by the Department of Defence.

The cases all concern adherence to the European Union’s working-time directive, which has been incorporated into Irish law. Disputes surrounding the directive, which deals mainly with the length of time a person can work without a break, have hitherto been resolved either in court or through conciliation and arbitration.

The offer of mediation took senior military management by surprise, according to sources. The military will be expected to implement any changes agreed through mediation and view the decision to change tack without consulting them as evidence of the state of relations between the department and senior command.

Asked about the change yesterday, the Minister of State with responsibility for defence, Paul Kehoe, said: “The working-time directive is an issue for me and I want to see it concluded as soon as possible.”

On the claimed lack of consultation between the department and senior military management, he said “that’s an internal matter” and declined to comment further.

A spokesman for Pdforra, general secretary Gerry Guinan, gave a cautious welcome to the change of approach.

“Pdforra are looking forward to engage in the process of mediation; however, we will be requiring that strict deadlines be adhered to,” he said.

Mr Kehoe was speaking at the launch, in the Glen of Imaal, of an Army general service rolling recruitment campaign which will last a year. New research by the officer representative organisation suggests that 79 per cent of its members are planning to leave the Defence Forces early “due to the lack of a viable career path as a result of Department of Defence policies”.

“Eleven per cent is in and around the average of any workforce, let it be teachers or nurses, so that 11 per cent surprised when there is such an issue out there on pay and conditions,” he said.

The Minister, together with the Chief of Staff, Vice-Admiral Mark Mellett, senior officers and some 40 officials from the department, was at Camp Coolmoney in the glen to see members of the 59th Infantry Group conduct mission-readiness exercises ahead of their deployment to United Nations duties in Syria.

The 130 personnel, including 14 officers, 115 enlisted personnel and a chaplain, will head for the Golan Heights in Israeli-occupied Syria later this month under the command of Lieut Col Louis Flynn.

They will provide quick-reaction-force protection for UN observers monitoring the 1974 ceasefire between Israel and Syria.

“The situation there is relatively calm,” said Lieut Col Flynn, as troops displayed their mine-clearance and counter-attack skills. “Obviously there are threats out there [in Syria] which we are more than capable of countering.”

The 59th includes seven women (two officers, three non-commissioned officers and two privates) and personnel from mainly eastern and southern counties. Apart from offering protection to Undof ceasefire observers, the 59th will seek to clear UN observation posts abandoned since 2017 of any threats, such as mines, so they may be reoccupied.