I have two families, one of which enables me to keep EU citizenship

I arrived in Britain from Cork in my mother’s womb, and was adopted by a London family 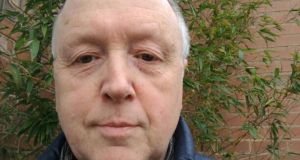 Anthony Simpson: ‘I applied for Irish citizenship soon after the 2016 Brexit referendum.’

“Dublin was the second city of the Empire,” said my cousin on an early visit there. He’s my first cousin. We were born a few months apart, in the 1950s, when Ireland and England were very different places to what they are now. We first met when we were already in our 30s.

I arrived in Britain in my mother’s womb, in 1953. She sailed from Cork, and took a cabin because she was expecting. In London, I was adopted by a kind family who made me their own, the youngest of three, with two older sisters. They and Britain have done well by me.

I studied at Oxford when Seamus Heaney was organising poetry sessions at the Old Fire Station during the turbulent 1970s. Later, I trained to become Her Majesty’s Inspector of Taxes, alongside colleagues from Northern Ireland. We had instruction in Birmingham, and one of my colleagues was regularly stopped when he passed through the airport. Seamus Mallon was his family friend, and we discussed John Hume’s unstinting efforts to build peace.

A few years on, after I had left the Revenue, John Hume welcomed groups of us to the European Parliament in Brussels for the Full Employment Convention to address Europe’s chronic unemployment, not least amongst the youth of Derry. By this time, I was working with Ken Coates MEP, a colleague of Hume’s in the European Parliament who was rapporteur on employment.

As the 1989 direct elections to the European Parliament approached, I had confided to my tax inspector friend from Belfast that I regarded myself as European more than anything. This was around the time I was establishing contact with my birth mother.

I regarded myself as European more than anything

My adoptive parents had both died some years earlier. Following the arrival of my first-born child in 1983, I tracked down my birth mother in Co Kerry. She introduced me to my cousin, and other close relatives whom I have visited regularly over the years.

So I have two families, one of which enables me to keep EU citizenship. With tens of millions of others, I acquired this new status in 1993, with the creation of the European Union. It affords diverse rights such as to live, work, study and travel freely throughout the EU, as well as protections such as that against discrimination on grounds of nationality. This status affords meaningful opportunities, which many are understandably reluctant to lose.

I applied for Irish citizenship soon after the 2016 Brexit referendum. The process took some time, especially as I had to supply my Adoption Order, which specified change of surname. This dated from 1954, and I never recalled seeing it. Then, one fine day, almost as an act of grace, I delved in a drawer and found the document neatly folded.

All through, the staff at the Department of Foreign Affairs and Trade were accessible and helpful. My Irish passport arrived some months later, requesting “to allow the bearer, a citizen of Ireland, to pass freely without hindrance and to afford the bearer all necessary assistance and protection”. This may prove helpful in the uncertain times ahead.

My three children are also eligible for EU citizenship by dint of their Irish grandmother. But my wife and tens of millions of other Britons are not eligible, and they are to be deprived of their status as EU citizens if and when the United Kingdom leaves the EU.

This imminent removal of status exposes a risk to all EU citizens: your EU citizenship can be taken away. This has already disrupted the lives of millions of Britons who have made life choices to live and work in various countries in the expectation that they would be EU citizens in perpetuity. They are in limbo, like their counterparts among the millions of EU nationals resident in the UK.

I applied for Irish citizenship soon after the 2016 Brexit referendum

To highlight this risk, we launched the Permanent EU Citizenship Initiative addressed to the European Commission, which already has some 105,000 endorsements, including more than 800 from Ireland. The initiative “requests the Commission propose means to avoid risk of collective loss of EU citizenship and rights, and assure all EU citizens that, once attained, such status is permanent and their rights acquired”.

The initiative runs until July. If we can gather a million endorsements from the EU28, crossing minimum thresholds in seven member states, the Commission is required to make a formal response, and the European Parliament must debate the initiative.

Ireland’s threshold is 8,250 endorsements, and we already have 10 per cent, so we need another 7,400 or so. Who will they be? Endorsements are collected online by a site administered by the European Commission (eci.ec.europa.eu/002/public/#/initiative), with the initiative translated into 24 languages including Gaeilge. Our seven person organising committee is drawn from Belgium, France, Germany, Greece, Ireland, Italy and UK.

Of course, Dublin is now a leading European capital, and I regularly stay with my cousin in Co Cork.