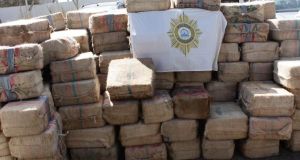 Some of the 260 bales of cocaine found in the cargo hold of the ship Photograph: Cape Verde Judicial Police

A “significant” proportion of the roughly €1 billion euro cocaine seizure off the coast of Africa was destined for the Irish market, gardaí believe.

On Friday 260 bales of the drug, weighing 9.5 tonnes, was found in the cargo hold of a ship travelling to Morocco from South America, making it the largest such seizure in recent years.

The drugs were seized when the ship was forced to dock in the port of Praia on the island of Cape Verde due to the death of one of the crew members.

Members of the small island nation’s police force were tipped off about the ship’s cargo by the Maritime Analysis and Operation Centre (MAOC), an EU funded anti-drug trafficking initiative comprising officials from seven European countries including Ireland.

MAOC, which is led by former assistant garda commissioner Michael O’Sullivan, had been tracking the ship’s journey across the Atlantic and alerted judicial police in Cape Verde about the drugs after officers learned it was planning to dock there.

The eleven Russian crew members were arrested and remain in custody.

Security sources said on Sunday a significant proportion of the drugs were likely destined for Ireland.

“With shipments this size the product would be broken into much smaller consignments very quickly after reaching Europe,”

“It is inevitable a good portion of that is destined for Ireland and other northern European countries,” a source said.

However, it is not thought Irish criminals were involved in the transportation of the drugs from South America.

Intelligence gleaned from previous operations suggests any Irish buyer would take delivery of their share in Spain before transporting it by land or sea to Ireland where it would be cut with other substances to increase its weight.

The Kinahan organised crime group is likely the only Irish gang with the resources to pay for such a large amount of cocaine.

However sources yesterday said they couldn’t confirm reports the group had agreed to take some of the haul.