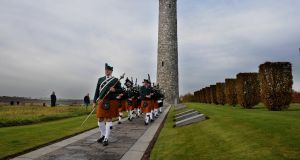 Enda Kenny is to attend the centenary of the Battle of Messines Ridge in what is expected to be one of his last acts as Taoiseach.

Mr Kenny will be in Belgium for the joint British-Irish commemoration which takes place on June 7th at the Island of Ireland Peace Park in Messines.

Confirmation came from the Department of the Taoiseach after Mr Kenny announced that he was stepping down as Fine Gael party leader.

He will be joined at Messines by the Duke of Cambridge representing the UK Government.

It is as yet unclear who will represent the Northern Ireland executive as the British general election is on the following day.

Local reports in Belgium suggest King Philippe will attend the commemorations, but this has not been confirmed.

The Island of Ireland Peace Park was opened in 1998 by President Mary McAleese and Queen Elizabeth II.

The Battle of Messines Ridge is noteworthy because the 16th (Irish) Division and the 36th (Ulster) Division fought together and captured the Flemish village of Wytschaete on June 7th, 1917.

Their assault was preceded by the detonation of 19 huge underground mines beneath the German positions.

Announcing the centenary commemoration last month, the Minister for Foreign Affairs and Trade Charles Flanagan said the emphasis will be on the “spirit of reconciliation which the two division have come to symbolise.

He added: “Those from the island of Ireland were brought together by diverse motivations but they shared a common purpose as soldiers and, caught up in the grim realities of war, no doubt a common desire: to survive and return home.”

It is also planned on the day to unveil a new memorial to Major Willie Redmond MP who was killed during the battle and to the stretcher-bearer Private John Meeke from the 36th (Ulster) Division who attended to him on the battlefield.

The steel silhouette depicting Meeke carrying Redmond on his shoulder will be paid for by the local authority in Heuvelland.

Separately, Bertie Ahern, who approved the funding to complete the Island of Ireland Peace Park when he was taoiseach, will speak about its status as a symbol of peace on Friday at 2pm in the council chamber of City Hall.

The seminar on Messines Peace Park and its contribution to Irish-British reconciliation is being organised by Dublin City Council and the Royal Dublin Fusiliers’ Association.