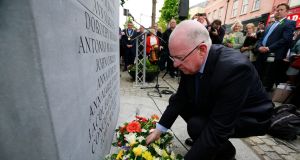 Minister for Foreign Affairs Charlie Flanagan lays a wreath at a commemorative event to mark the 43rd anniversary of the Dublin and Monaghan bombings. Photograph: Nick Bradshaw 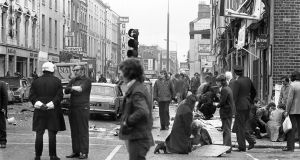 Members of the public tend to the injured following the detonation of a bomb on Talbot Street in Dublin in May 1974. Photograph: Tom Lawlor 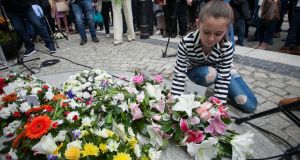 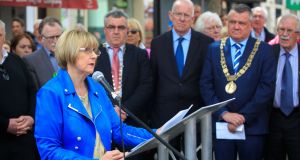 Margaret Urwin from Justice for the Forgotten helps mark the 43rd anniversary of the Dublin and Monaghan bombings. Photograph: Gareth Chaney Collins

Minister for Foreign Affairs Charlie Flanagan has renewed his call on the British government to release all its files relating to the Dublin and Monaghan bombings in May 1974.

On the 43rd anniversary of the attacks, Mr Flanagan said he hoped the UK government that takes power after next month’s election would release files that shed light on the perpetrators behind the Loyalist bomb attacks which killed 33 people, including a woman who was nine months pregnant.

The May 17th, 1974 attacks marked the highest number of deaths on a single day of the Troubles. The victims and survivors were remembered during a ceremony at the memorial on Talbot Street in Dublin where one of the three bombs in the city exploded.

“I know that the pain of the families and of the survivors continues to endure. That pain is compounded by the absence – after more than four decades – of the full truth of what happened,” Mr Flanagan told a group of about 200 people gathered at the memorial.

“My Government colleagues and I are determined to continue, and to complete, our efforts to seek the truth of those awful events. Every year that passes we must renew our determination to establish the truth and so secure some measure of comfort for all who have suffered.”

Justice for the Forgotten, the group representing the families, has campaigned for years for an inquiry into claims that British security agents helped the bombers carry out the attacks.

Three bombs were detonated during a busy Friday rush-hour on Parnell Street, Talbot Street and South Leinster Street to maximise fatalities as people made their way home and to train stations.

A fourth bomb exploded about an hour and a half later in Monaghan in what was believed to be a diversionary tactic to allow the Dublin bombers cross the border and return to Northern Ireland. No one has ever been charged over the bombings.

Aidan Shields, whose mother Maureen was killed in the attacks, said he was hopeful there would be “some news” from the investigation by the Police Ombudsman in Northern Ireland into the Glenanne Gang of loyalists from mid-Ulster who are believed to have been involved in the bombings.

The gang is suspected to have included serving members of the Northern Irish security forces.

Mr Flanagan said he and the Taoiseach had “vigorously” pursued their request to the British government to hand over its files on the bombings to an “independent, international judicial figure”.

He said it was “imperative” that a fresh independent inquiry take place “to discover the facts around the horror of the Dublin and Monaghan bombings”.

“There are issues that the British government don’t feel comfortable with but I believe it is important in the spirit of true reconciliation across the island of Ireland that all papers and documents, however sensitive they might be, be handed over to the authorities,” he said.

Delivering the oration at the commemoration, Denis Bradley, the former vice-chairman of the Northern Ireland Policing Board, rejected the British government’s reason for not releasing files on the bombings on the basis of national security.

While working on policing issues in the North, he said, national security “kept popping up” but they found that such an issue could be solved within days and later within hours.

Sinn Féin president Gerry Adams, who attended the commemoration, said the people who were preventing the truth from coming out about the bombings were the British government.

“It is they who are putting the block on this,” he said.