Praise for outgoing Fine Gael leader from across political lines 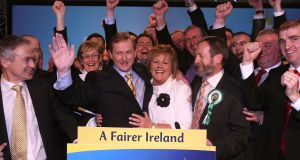 Taoiseach Enda Kenny with his wife Fionnuala after he delivered his presidential address at the Fine Gael Ard Fheis in 2009. Photograph: Julien Behal/PA Wire

Tributes are being paid to Taoiseach Enda Kenny after he confirmed he will stand aside as Fine Gael leader from midnight.

Tanaiste Frances Fitzgerald said: “Enda always strives for the very best for this country. He’s tireless, relentless, enthusiastic and compassionate. His zest for what he does has no equal. He has been a great colleague and it was my privilege and honour to serve by his side.”

Minister for Housing Simon Coveney hailed Mr Kenny as “a towering figure in modern Irish history” who took over the leadership of Fine Gael when the party was “broken and demoralised”.

Mr Coveney said Mr Kenny was “calm and clear-headed” when the economy “teetered on the brink” and his record in Government would be viewed positively by historians.

“I saw at close quarters how skilled and driven he was to succeed for our party, in Government and for our country. His record in Government since 2011 will be viewed very positively by historians, not least how he led the restoration of our economic financial independence over that period, which was a landmark event,” he said.

“But it is not just these high profile moments that I reflect on, I recall the energy and excitement of a number of elections campaigns - any day on the campaign trail with Enda was a lively one; or those early days in Government when the economy teetered on the brink and Enda’s calm and clear headed leadership helped guide us through; or the late nights and long hours trying to construct a new coalition Government in 2016.”

Minister for Social Protection Leo Varadkar praised Mr Kenny for his tenure, insisting he has learned a lot from him.

“Above all, he is a kind and decent man, always ready with an encouraging word or a solid piece of advice. He is devoted to family, party and country. I hope sincerely that his expertise will continue to be available to us. But I know that the party, and the country, will always remember him and will always be grateful.”

“His clear sense of compassion, his countless energy, his endless patience and having served with him at Cabinet, I can say I very much admire his style and skill in chairing often difficult Cabinet meetings.”

Fine Gael eputy leader James Reilly said Mr Kenny would be remembered as ad true statesman, who had made huge personal sacrifices to carry out his duties. He insisted the Taoiseach would remain as leader in the interim period.

The Kildare TD said: “His leadership style was compassionate, pragmatic and inclusive, building a strong team which he led with energy and enthusiasm.

“Having inherited a country and an economy that was decimated by mismanagement, Enda’s strong leadership and ability to make hard decisions was recognised both at home and abroad and saw our international reputation restored and strengthened.”

The Taoiseach received a standing ovation from the party as he outlined his departure plans.

He had earlier held a meeting with his staff advising them of his intention to stand aside.

Minister for Transport Shane Ross, on behalf of the Independent Alliance, hailed outgoing Mr Kenny was a “true statesman” with the interests of the country “at his core”.

During the talks on a formation of government last year, Mr Ross caused consternation when he described Mr Kenny as a “political corpse”.

However, the Independent Alliance of Mr Ross, Finian McGrath, John Halligan, Sean Canney and Kevin “Boxer” Moran negotiated together for a senior ministry, super-junior and one other Minister of State role.

“We in the Independent Alliance thank An Taoiseach for his leadership since coming into Government last year. He has proven to be a true statesman who has always had the interests of the country at his core,” Mr Ross said.

“We wish him and his family every happiness in the future. In the meantime, the work of government must continue and we in the Independent Alliance will work to ensure the Programme for Government is fully implemented.”

Minister for Children Katherine Zappone praised Mr Kenny, who she said had brought stability and delivered a Government at a time when voters set the country on a new course.

She said he was always open to change, citing the marriage equality referendum is the greatest example of this.

Ms Zappone added: “Enda Kenny is at all times respectful and willing to listen to diverse views. It is a talent and a skill which will serve him well no matter what future path he takes.

“I wish Enda, Fionnuala and their family every good wish for the future.

“However it is also important in the coming weeks that our plans for children, young people and families are not stalled.”

The Louth TD said the Government led by Mr Kenny had a “deeply flawed” strategy for dealing with the challenge of Brexit and a “clear lack of affinity” with Northern Ireland.

Mr Adams said there were ongoing and unprecedented housing and homelessness problems, the health service was “in chaos” and there was “deep crisis” in policing and justice.

“This is a do-nothing Government courtesy of the confidence and supply arrangement with the Government’s partner in Fianna Fáil,” he said.

“The reality is that so-called new politics, led by Mr Kenny and the Micheál Martin, isn’t new at all. As a result, there is a deep paralysis in the body politic.”

Mr Adams claimed no matter who led Fine Gael the party would be wedded to policies that caused hardship.

He said that would not change if Mr Varadkar or Minister for Housing Simon Coveney, or any other contender, took over.

However, Mr Adams wished Mr Kenny and his wife Fionnuala and family well.

“It will be a big a change in all of their lives. He and I disagree on many political issues, but I acknowledge that he did his best from his perspective,” he said.

“From Sinn Féin’s perspective, this was not good enough.”