‘Somehow it gets worse ... sometimes it’s just like opening a tap. You can’t stop crying’ 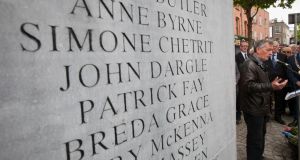 Former vice-chairman of the NI Policing Board Denis Bradley delivers a speech at the 43th anniversary of the Dublin and Monaghan bombings in which 34 people were killed. Photograph: Gareth Chaney

Derek Byrne remembers working as a 14-year-old petrol pump attendant filling up the car of Patrick Fay at the Westbrook garage on Parnell Street in Dublin and making fun of its bright yellow colour.

“Nice car, shame about the colour,” he joked. Fay (69), from Ardee, Co Louth took no offence and even tipped the young garage worker a shilling.

As he turned away from the car, a bomb detonated 10ft from him. The blast killed Fay.

That bomb was the first of four that day – May 17th, 1974 – in Dublin. By nightfall, three had been detonated in Dublin and a fourth in Monaghan. In all, 33 people including a woman who was nine months pregnant, died. It marked the largest loss of life in a single day of the Troubles.

Such were his injuries that a priest gave Byrne absolution. The young Dubliner was driven by ambulance to Jervis Street Hospital, pronounced dead on arrival and woke up three hours later in the morgue. He still has shrapnel in his leg and chest and has been waiting 28 months for an operation.

“I still have flashbacks, nightmares. At night time, when the whole place is quiet, it is like replaying the whole lot in my mind,” he says, standing next to the son of the man he served petrol to that day.

Outside St Mary’s Pro-Cathedral in Dublin after a commemorative Mass marking the 43rd anniversary of the bombings, the two men and other survivors reflect on the unanswered questions.

Both Byrne and the son, also Patrick Fay, like the other victims of the Dublin and Monaghan bombings, want to see the British government hand over what they know of the attacks.

Even though some loyalists suspected of involvement have died, London is still refusing to divulge the contents of its files on the bombings, citing the potential risk to national security.

Various judicial inquiries, including one by the late Justice Henry Barron, have brought little information on the role of the Glenanne Gang of loyalists suspected of involvement and collusion of British security forces including the Ulster Defence Regiment and the Royal Ulster Constabulary.

Work by Margaret Urwin, co-ordinator of the Justice for the Forgotten Group, journalist Ann Cadwallader and the Pat Finucane Centre in Northern Ireland has pointed to the involvement of security agents in the bombings, yet the British government is not budging on the files.

Relatives hope that the investigation by the Northern Ireland Police Ombudsman Dr Michael Maguire into the Glenanne Gang, including leading loyalist, the late Robin “The Jackal” Jackson – a group suspected of killing more than 100 Catholics – will turn over important stones.

Meanwhile, time is ticking on and family members of the victims are getting older and dying.

“We are not forgotten. At the end of the day they are going to have to show their hand. We don’t mind who looks at the files as long as what is in the files gets out.”

The passage of time does not make it any easier, says Fay, who was 26 and living in London when he received a call from his mother-in-law that his father had been killed on Parnell Street.

“Somehow it gets worse,” he said. “Sometimes it’s just like opening a tap. You just can’t stop crying.”

Fiona Ryan lost her mother, Maureen Shields, in the Talbot Street blast. Maureen drove into the city to pick up her husband who was working in Guiney’s department store because there was a bus strike.

The family checked on their father after the blast, but were not initially worried about their mother.

“You grow accustomed to it,” said Ryan, of the years passing since her mother was killed. “It is what I have known for most of my life. You would never have appreciated the enormity of losing your mother until you become a mother yourself. You see some of the things that she was robbed of in her life.”

She wonders whether the British government might be concealing something about the suspected bombers because of their refusal to hand over the files on the attacks.

“If they was nothing to hide, if they weren’t protecting somebody, why is this information not being released?” she asked, insisting that she wants information, not retribution.

“You just want to know the who, why, when and where. I don’t want revenge for it,” she said.

Margaret Urwin, co-ordinator for the Justice for the Forgotten group that is campaigning for information about the suspected security-forces collusion in the attacks, said that the annual remembrances to the victims and the campaign are important for the families.

Last year a new survivor came on board in the campaign after 42 years and at this year’s commemoration she met the relative for the first time of one woman killed in the attacks.

“Commemoration is so important for families, remembering together. They find a certain healing in it,” she said. “It is not that they are looking for retribution or convictions or anything like that. The vast majority are looking for truth and accountability.”

Former Northern Ireland Policing Board vice-chairman Denis Bradley, delivering the oration at the 43rd annual commemoration at the Talbot Street memorial, said he was not hopeful of the British government divulging the crucial information the families were after but he paid tribute to the Justice for the Forgotten and their campaign.

For the survivors, they are still hopeful that some new information will emerge to make the 44th anniversary easier.

“The only way it would get easier is if there is disclosure,” said Derek Byrne, 43 years after serving petrol to Patrick Fay that day in Dublin.