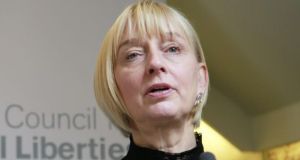 In open letter to Boris Johnson, Commissioner for Victims and Survivors Judith Thompson said the legislation to set up the scheme must be implemented ‘immediately’. File photograph: Nick Bradshaw

The North’s victims’ commissioner has written to the UK prime minister asking for an end to the “shameful stand-off” which has delayed the introduction of a pension scheme for victims of the Troubles.

In open letter to Boris Johnson, which was also sent to the Northern Executive, the Commissioner for Victims and Survivors Judith Thompson said the legislation to set up the scheme must be implemented “immediately”.

“It is simply not good enough to continue to make a political football out of victims and survivors with an unseemly squabble over who is going to pay,” she said.

Legislation to provide a pension scheme for people who suffered physical or mental injury “through no fault of their own” as a result of the Troubles was introduced by the North’s Secretary of State in January, and was due to open for applications on May 29th.

Payments will range from £2,000 to £10,000 per year and will cover injuries sustained between 1966 and 2010. Anyone injured in the UK, or British or Northern Ireland citizens injured in Europe, are potentially eligible to apply.

However, the scheme has stalled, with the Northern Executive and the UK government deadlocked over who should pay the estimated £100 million cost.

The Executive maintains that it is Westminster’s responsibility, as the legislation was introduced in the UK parliament. The UK government insists the scheme should be paid for out of Northern Ireland’s block grant – the money the Northern Executive receives from Westminster to fund public services in the North.

Responding to Ms Thompson’s letter, a spokesman for the UK government said it had fulfilled its legal obligation by making legislation establishing the victims’ payment scheme, and the Northern Executive “must now deliver.”

He said the UK government “understands the deep frustration of those who were injured in the Troubles and their families and remains extremely disappointed by the current delay.”

However he said the “discussions” about funding “are not preventing the Executive from being able to take vital steps to unlock its implementation, which it must do urgently,” the spokesman said.

Last month it emerged that the government department in Northern Ireland which will oversee the administration of the scheme has not yet been designated.

In her letter, Ms Thompson said it was “cruel, callous and insulting that this shameful stand-off played out in public is undoing the acknowledgement of pain, suffering and loss that the victims’ payment was to deliver.

“It has become the ultimate insult to those victims and survivors who campaigned for years to be acknowledged, respected and valued,” she said. “It is not good enough.”

Given that the scheme is open to victims from across the UK, Ms Thompson said it should not therefore be the sole fiscal responsibility of the Northern Executive.

However, she demanded the Executive designate a department to administer the scheme immediately.

“Twenty-two years after the Belfast Agreement was signed, we are still seeing lives devastated by legacy issues, pain passed down through families, and communities torn apart by mental health crises, substance misuse, domestic and sectarian violence,” she wrote.

“This law, passed in Westminster, will do something to make life better for those who suffered the most. It is our expectation that this legislation is implemented immediately.”

The former secretary of state for Northern Ireland Lord Peter Hain, told the House of Lords on Tuesday that he had met members of the group who were understandably “devastated” by the delay.

If the dispute over funding “is the cause of the impasse then there needs to be an urgent adult conversation to resolve it,” he said.

“Either way it is completely unacceptable that the law is being flouted in this way, and I ask the Secretary of State for Northern Ireland, as the sponsor of 2019 Act, to have urgent discussions with the First and Deputy First Ministers of Northern Ireland to resolve this shameful impasse.”