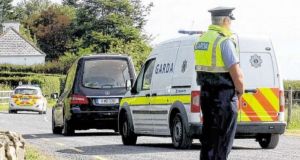 The remains of Ben Duffy (5) are taken from Tourmakeady, Co Mayo, by hearse. Photograph: Paul Mealey

The community of Tourmakeady, Co Mayo, gathered online this morning for prayers for Ben Duffy (5) whose body was taken from Lough Mask on Tuesday morning.

The youngster had been playing with family members just yards from his home on the shores of the famous fishing lake on Monday when he appeared to have been swept away on an inflatable dinghy.

Fr John Kenny, parish priest of Partry and Tourmakeady, had cancelled his usual online prayer meeting at 11am, entitled “Elevenses,” on Tuesday, telling parishioners first to “please pray for Ben’s family that he will be found”.

Later Fr Kenny posted : “There will be no #Elevenses this morning June 2nd. Please Pray for Ben Duffy and his Family, I am with them now”.

Fr Kenny said parishioners they were welcome to join him for Wednesday’s Elevenses.

After Ben went missing, locals said a search was quickly organised, but when rescue teams got to the dinghy it was upturned, and the boy was not there.

The Coast Guard helicopter – based in Shannon, Co Clare – had conducted an aerial survey of the lake on Monday evening, while search teams worked on the ground.

Gardaí in Castlebar – who were assisted by Coast Guard, Civil Defence, Lough Mask Water Rescue and local divers – confirmed the search was ended after Ben’s body was found shortly after 8am on Monday.

Ben was the youngest child of Allan and Treacy Duffy whose home is just a short distance from where he had been playing with family members. He had three brothers and one sister.

Attempts to contact Fr Kenny on Wednesday were not successful, but on Tuesday he told the Mayo News d the whole community was in a state of shock.

“Yesterday evening, it went from a sunny summer’s day with a holiday atmosphere buzz around the place to people screaming for help and devastation for the family.

“The community is stunned and shocked by what happened and are so upset for the family. The Duffys are involved in everything, the soccer, the Gaelic, the music, the dancing, the fundraising, everything that goes on in the parish.

“They are a well-loved family, and little Ben was the youngest of five and just five years old,” he said.