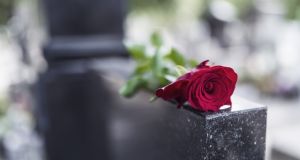 The family of Irish-born Margaret Keene want the words “In ár gcroíthe go deo” on the stone above her grave at St Giles burial ground at Exhall, Coventry. Photograph: iStock

The Church of England has ruled that an Irish-language inscription on a Coventry gravestone must have a translation with it to ensure the phrase is not mistaken as being a political statement.

The family of Irish-born Margaret Keene want the words “In ár gcroíthe go deo” on the stone above her grave at St Giles burial ground at Exhall, Coventry. Translated the words mean “in our hearts for ever.” She died in July 2018 at the age of 73.

“Given the passions and feelings connected with the use of Irish Gaelic there is a sad risk that the phrase would be regarded as some form of slogan or that its inclusion without translation would of itself be seen as a political statement.

He said Mrs Keane was born in the Ireland but had made her life in the UK but had remained proud of her Irish heritgage.

The application to the Consistory Court for the inscription without any translation came from Mrs Keene’s daughter, Caroline Newey.

The judge said she had argued that there was no need for a translation and that “the Irish language is regarded not just as a means of communication but as a vehicle of symbolic value.”

“Mrs Newey says that the use of that language without translation is not a political statement but is a recognition of Mrs Keane’s identity and is to honour ... [her] native tongue,” he said.