Emma Mhic Mhathúna dies at the age of 37 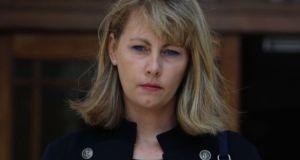 Emma Mhic Mhathúna, one of the women affected by the CervicalCheck controversy, has died at the age of 37. File photograph: Collins Courts

Emma Mhic Mhathúna, one of the women affected by the CervicalCheck controversy, has died at the age of 37.

The mother-of-five had been diagnosed with terminal cancer earlier this year.

She was one of the 221 women with cervical cancer found to have received incorrect smear tests during a clinical audit of past tests by the CervicalCheck screening programme.

In June, Ms Mhic Mhathúna and her five children settled a legal action over the controversy for €7.5 million.

The Kerry woman had revealed over the summer that her cancer had spread to her brain.

Ms Phelan said she had not realised Ms Mhic Mhathúna’s illness was so advanced.

“I really thought she had a few more months in her to be honest. I didn’t realise that she was as bad as what she is.”

She said Ms Mhic Mhathúna had been treated in the same hospital as her and had received an immunotheraphy drug.

“I knew things were bad but you kind of hope that like in my case the immunotherapy drug would take hold and give her a bit more time with the children,” she told RTÉ’s This Week programme.

Ms Phelan stressed that Ms Mhic Mhathúna was a mother of five and said the children would know she “fought so hard to stay in this world” and ensured they would be taken care of.

Recalling Ms Mhic Mhathúna’s emotional radio interview in which she expressed concern her youngest child would not remember her, Ms Phelan said: “I think that had a massive impact on the pressure that was put on the Government at the time.

“She had a huge impact and in fairness to her she was a formidable woman.”

Stephen Teap, who only learned about his late wife Irene’s incorrect smear tests after the controversy broke, said Ms Mhic Mhathúna had demonstrated bravery and courage.

“Another brave mother leaves this world, gets her wings and leaves behind five amazing children. Her pain and suffering is over but its now all about her kids,” Mr Teap.