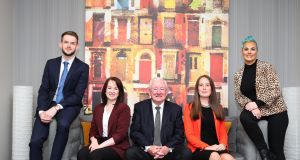 The winners of the 2018 Bursary Awards of the Press Council of Ireland for students of media, journalism and communications were presented at an awards ceremony in Dublin on Friday.

Chairman of the Press Council Seán Donlon congratulated Conor McCrave of Dublin City University (DCU) who received the top award and €1,000 for a series of articles he wrote on foster and residential care.

McCrave has graduated from DCU and is now employed by the Irish Independent.

Second place was jointly shared by Jemima Burke of the National University of Ireland, Galway, and Nikki Murphy of Dublin Institute of Technology. Burke received the award for a series of features articles published in the Connacht Telegraph. Murphy was awarded for an article that appeared in the Edition, DIT’s student newspaper, on Garda vetting of students participating in an access scheme in the college.

Hayley Roche of Dublin Business School received a commendation for her dissertation in film studies on the Mexican director Guillermo del Toro.

Mr Donlon said in spite of the difficulties facing journalism today it was heartening to see so many good students undertaking journalism courses.

He said the standard of work submitted for the bursary awards was impressive and that he looked forward to seeing the winners’ bylines in years to come.