Emergency services only at Dublin hospitals during nurses strike 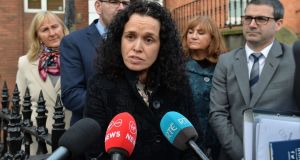 Large hospitals in Dublin such as St James’ and Tallaght will be providing emergency services only next Wednesday if the planned nurses’ strike over pay and staffing goes ahead.

The Dublin Midlands Hospital group said on Wednesday that the scheduled work stoppages by nurses on January 30th and on five other days in February would have “ a significant impact on all hospital services”.

“Each hospital in the Dublin Midlands Hospital Group is currently establishing the number of patients who will likely be impacted by the industrial action next week and will begin the process of contacting patients over the remainder of this week.

“Each hospital will endeavour to ensure that all patients are kept informed in a timely manner but advise the public to pay close attention to HSE/hospital online and social channels and local/national media outlets for further updates.”

The hospital group said the planned strikes by nurses would have significant implications for services.

It said services that faced postponement would include elective surgery, out-patient clinics and some day services.

“On the 30 January 2019 and on any subsequent days of industrial action, the hospitals within the group will be providing emergency services only.”

Hospitals in the Dublin Midlands group include St James’ , Tallaght , the Coombe and St Luke’s in Rathgar.

Hospitals in the west and north west have also said the planned nurses’ strike will hit scheduled services for patients. It said the work stoppages would “have significant impact on all services across every hospital in the group”.

The Saolta Group said its hospitals were currently identifying patients whose appointments or procedures were due to take place on Wednesday next, January 30th.

“Over the coming days those patients will be contacted to advise them of the postponement of their appointment. Postponed services are to include elective surgery, out-patient clinics, and day services.

“Each hospital will make every effort to ensure that patients are contacted as quickly as possible but we also advise the public to pay close attention to local and national media outlets for further updates.”

Meanwhile talks at the Workplace Relations Commission (WRC) aimed at finding a resolution to the planned nurses’ dispute took place on Wednesday afternoon and have now adjourned until Thursday.

The general secretary of the Psychiatric Nurses Association (PNA) Peter Hughes said there had been a frank exchange of views.

He said the parties would reflect overnight and meet again on Thursday.

Have your say: Have you had a hospital appointment cancelled?

The general secretary of the Irish Nurses and Midwives Organisation (INMO) Phil Ní Sheaghdha said her union was open to explore all avenues that would avert a planned strike next week.

She said there was still a lot of dialogue and discussion to take place.

She confirmed talks on Wednesday aimed at heading off the planned strike had centred on each side setting out their views and reiterating their points.

She said the WRC conciliation officers had “given a clear indication that there was a reflection required”.

INMO strike committees were continuing with their preparations for the planned strike next Wednesday, she added.

The union would have a further meeting with the HSE on Thursday on contingency arrangements to apply during the dispute, she said.

The WRC talks are being attended by health service management, the Department of Public Expenditure and the INMO, the PNA and Siptu trade unions.

Health service management insisted on arriving for the talks on Wednesday that they cannot go outside the scope of the current public service pay deal.

The HSE’s head of Human Resources Rosari Mannion said management was approaching the process in a positive manner and with an open mind.

However she said health service management was confined to the terms of the current public service agreement.

“If we can reach an agreement within the confines of the overall public service pay agreement then I am hopeful we can make progress,” she said.

She said health service management would do everything in its power to find a resolution but that they had to work within the terms of the current accord.

Ms Mannion said the HSE was working through details of contingency arrangements to apply if the dispute went ahead.

Nurses meanwhile said it is now obvious the HSE did not have the authority to resolve the current dispute.

Speaking on RTÉ’s Today with Sean O’Rourke programme she said the INMO would not call off its dispute to have negotiations as requested by the HSE.

She said: “That is not a basis for talks.”

She said the only party that was not vocal about coming to the table for talks was the Government .

The Mater Hospital in Dublin has already said it would be providing emergency services only on January 30th, and on any subsequent days of industrial action. “ All other services will be postponed, including but not limited to elective surgery, out-patient clinics, minor injuries unit service and day services.”

The PNA separately plans to put in place an overtime ban on January 31st, February 1st, 5th and 6th, and then to escalate its campaign of industrial action to full strikes on February 12th, 13th and 14th.

Nurses are seeking increases to bring their pay into line with other graduate -entry grades in the health service such as physiotherapists who,they maintain, receive up to €7,000 more per year.

Nursing unions contend that such increases are required to tackle recruitment and retention difficulties in the health service.

The Government has argued that the nurses’ pay demands would cost €300 million and lead to knock-on claims elsewhere across the public service.

On Tuesday the country’s largest public service union Fórsa warned of pressure for further pay claims in the health sector and elsewhere if some groups of workers - presumably a reference to nurses - were granted pay benefits beyond those set out in the current public service agreement.

Fórsa told members in a newsletter that the benefits due to members under the public service accord, including pay rises, improvements for so-called “new entrants” and potential measures to address recruitment and retention issues, “are likely to be jeopardised if a union fails to abide by its terms”.

“Fórsa is on record to say that it, therefore, expects all the parties to the agreement, including employers and other unions, to abide by the terms of the deal in the same way.”