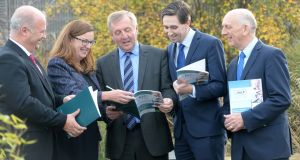 The Government has announced an emergency public health response to deal with the potentially fatal and antibiotic-resistant superbug known as CPE/CRE.

Minister for Health Simon Harris said on Wednesday he had convened the National Public Health Emergency Team as a public health response to the bug, which had cost Limerick University Hospital €4 million to tackle over a two-year period.

In Tallaght hospital, it had resulted in the cancellation of some 700 surgeries over two years and had cost an estimated €2 million.

Human infections with CPE are associated with poorer patient outcomes and mortality rates exceeding 40-50 per cent, and higher hospital costs.

Mr Harris said it was estimated that antimicrobial-resistant infection was responsible for about 25,000 deaths a year in the EU.

The bug has developed the ability to become resistant to last-resort powerful antimicrobials known as carbapenems, which makes them more challenging to treat if they go on to cause infection.

Mr Harris said CPE had been declared as a public health emergency, so that it would be managed in line with the public health plans which had been previously put in place for influenza.

He and Minister for Agriculture Michael Creed launched Ireland’s first National Action Plan on Antimicrobial Resistance on Wednesday. It will run for three years, until 2020.

“We have seen a rapid and worrying increase in the incidence of CPE in Ireland, with a significant increase in numbers of cases of CPE in recent years. Known outbreaks have occurred in eight healthcare facilities in Ireland, resulting in high costs and bed closures,” Mr Harris said.

The Minister said antimicrobial resistance was a real patient safety issue and that in Ireland about 500 patients had healthcare-associated infections on any given day. It was a problem that would clearly worsen without intervention.

The World Health Organisation (WHO), Centers for Disease Control and Prevention in the US and the European Centre for Disease Prevention and Control all identify that infections with CPE are a serious threat to patient safety due to their resistance to multiple antimicrobials, meaning that there are very few therapeutic options to treat infected patients.

The Government was taking a number of important steps and a National Public Health Emergency Team would be convened next week.

“This group will provide advice, guidance, support and direction on the surveillance and management of CPE at national level; the development and implementation of a strategy to contain CPE and provide oversight.”

Chief medical officer Dr Tony Holohan said he had examined the issue, in conjunction with the National Patient Safety Office, and had concluded that the patient safety issues were so important that this CPE public health emergency required “a co-ordinated whole-system response”.