Two other people being treated for injuries at Limerick University Hospital 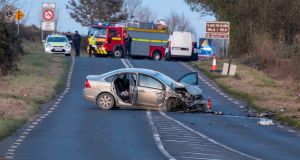 The scene of the crash at Cahercallamore, near Ennis, Co Clare. Photograph: Press 22

A man has died following a two-vehicle crash at Ennis, Co Clare, on Monday afternoon.

The crash happened at Cahercallamore, near Ennis, at about 2.30pm. A male rear passenger aged in his early 80s was taken to Limerick University Hospital with serious injuries, and passed away later in the day. The female driver and front seat passenger were also treated at Limerick University Hospital for injuries described as non-life threatening.

In the second car both the male driver and female passenger were uninjured, according to gardaí and emergency services who attended the collision scene.

The road was closed for a time while Garda forensic collision investigators completed their examination. It has since reopened.

Gardaí at Ennis have appealed for any witnesses to come forward, particularly any motorists who were travelling in the area at the time and may have dash cam footage. Anyone with information is asked to contact Ennis Garda Station on 065-6848100, the Garda Confidential Line on 1800-666111 or any Garda station,