Eir broadband plan looks set to be rejected by State 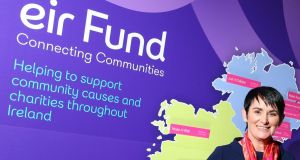 An alternative plan for delivering rural broadband for €1 billion “has not met” the State’s criteria for the roll-out of high-speed connections, the Department of Communications has said.

It is the clearest indication to date that the Government will formally reject the €1 billion proposal by telecoms company Eir, which was posited as an alternative to the €5 billion National Broadband Plan.

The proposal was submitted by Eir in a letter to the department last Friday. A spokeswoman for the department said it did not satisfy key criteria relating to State aid, transparency, access to the network for commercial providers, State clawbacks for profit and risk sharing.

“The department will respond comprehensively to this letter, but from an initial consideration and comments made in the [Communications] committee, it is clear that this new approach has not met the above conditions,” the spokeswoman said. She added that backing out of the National Broadband Plan process would add three to five years to the delivery of rural broadband.

It comes as Eir chief executive Carolan Lennon writes in today’s Irish Times that the company warned the Government about “unnecessary costs and complexity for almost two years” while bidding for the National Broadband Plan.

Outlining her company’s approach to delivering country-wide broadband for €1 billion, she writes that the plan “leads to substantial and excessive cost to the State”.

Ms Lennon criticises the specifications of the National Broadband Plan, writing that “while we fully believe everyone in rural Ireland should have access to high-speed broadband, we don’t believe it needs to be better than that available in our towns, cities and the rest of rural Ireland”.

Ms Lennon writes that Eir could deliver the plan by “reusing existing infrastructure rather than building new connections.

“The vast majority of homes in rural Ireland already have an Eir connection, and we would reuse the existing overhead or underground plant where available ... For €1 billion we could build a network which would pass all the rural premises in the NBP with high-speed broadband and connect all those who want it to their broadband provider of choice.”

The Oireachtas committee will on Wednesday hear from officials at the department, who are expected to address the Eir plan in detail.

On the impact of abandoning the NBP process on time frames, a department spokeswoman said that “Eir has explicitly stated that its letter is not a formal offer seeking to replace the current NBP process. Eir had previously withdrawn from that procurement process. Any new procurement process would delay the project by between three and five years.”

A Government source said that its aim was to “make sure the necessary protections for the State are included. Otherwise, we are using State money to help the dominant player in the market make more money for their shareholders.”

The source continued. “Eir have said themselves that they don’t actually want the contract. It’s easy to pull out figures when you’re talking about hypotheticals.”