After queueing for over 24 hours sisters Rebecca and Catherine Douglas and their friend Lauren Leahy were in jubilant mood after successfully getting tickets for Ed Sheeran's Phoneix Park shows. 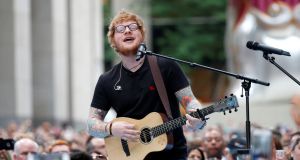 Ed Sheeran has added extra concert dates for Dublin and Cork after the 300,000 tickets for his first seven Irish gigs sold out in less than 24 hours.

Aiken Promotions said this morning tickets for the “third and final dates” on May 6th at Páirc Uí Chaoimh and May 19th at Phoenix Park will go on sale this Saturday at 9am.

The 300,000 tickets sold for his concerts is a record for a musician’s Irish concerts.

Aiken Promotions has warned fans not to buy tickets from secondary sellers or unofficial sources.

It said some websites are offering e-tickets or print at home tickets but said these “do not exist for any of the sold-out Ed Sheeran Irish tour dates”.

“In addition, seated tickets are on offer for seats that do not exist. The tickets are not legitimate and must be avoided.”

A spokesperson for Aiken Promotions also warned fans “not to trust search engines as they often lead you towards secondary ticketing websites.”

The spokesperson added: “To gain access to the concert you are required to bring your tickets along with the purchasing credit card, or a photo/photocopy of the credit card, and a valid form of ID to reflect family name.”

If the ticket is bought as a gift the ticket holder would need a copy of the card used for the purchase and ID showing the family name.

Ticket seller Ticketmaster said: “Fans should be aware that Ticketmaster will be installing an access control system at all the Ed Sheeran shows and if you don’t have a valid ticket, you won’t get in.

Despite these measures tickets are being sold online for multiples of the purchase price with ticket reselling site viagogo.ie quoting €945 per ticket.

Sheeran has also added four extra dates to his UK tour after tickets sold out almost a year in advance.