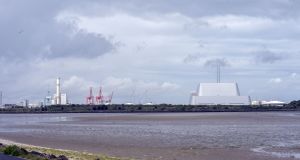 Dublin Waste to Energy, the company which operates the Poolbeg incinerator, dismissed fears it was the source of a fly infestation which had bothered local householders. Photograph: Brenda Fitzsimons

Residents of Sandymount, Ringsend and Irishtown have expressed disappointment with how news of a “moderate” fly infestation at the Poolbeg incinerator was made public.

On Thursday, Dublin Waste to Energy, the company which operates the incinerator, dismissed fears that it was the source of a fly infestation which had bothered householders in Ringsend, Sandymount and Irishtown over the previous five days.

Tony “Deke” McDonald, who runs Deke’s Diner at the Sean Moore Road roundabout in Ringsend, said the infestation was the worst he had ever seen.

“It started around four or five days ago with a swarm of biblical proportions. People would be used to flies in the summer, but I’ve been running the diner 17 years next week, and I’m 30 odd years in the area, and I’ve never seen the like of it.” he told The Irish Times.

A spokesman for Dublin Waste to Energy said it was not the source of the problem, adding: “There are no waste deliveries to the plant at the present time”.

But on Friday the Environmental Protection Agency said following an inspection at the plant “on foot of reports of an increased number of flies in the local area” an inspector had found “moderate fly numbers in the waste intake building and bunker area”. The agency also revealed the company running the incinerator had called in “a pest control contractor on site on the 2nd, 5th and 6th of July to undertake fly control”.

The agency’s announcement concluded by saying it had instructed the operators “ to continue fly treatment, as necessary, to ensure that fly populations do not increase on site”.

Oonagh O’Reilly who she lived “a street or two back” from the seafront and had noticed an “uncomfortable” amount of flies. “But what really upset me was a lack of candour on the part of the incinerator operators. They said they were not the source of the infestation but it was the EPA which said the incinerator had been dealing with flies all week”.

Ms O’Reilly’s friend Mary Kenny said she lived on Strand Road, Sandymount and was also “not delighted with the way we found out the incinerator was dealing with a fly problem”. She asked if waste had been stored at the facility.

However experience of and annoyance with the fly problem appears to be mixed.

John Parkes who lives on Bremen Road off Sean Moore Road said his family had noticed “more flies which seemed to come earlier this year”. “We can manage but there seemed to be more this year”, he said.

But Mark Kenny who said he lived “over there” indicating a housing development facing the Clanna Gael Fontenoy GAA club, said he had no experience of the flies.

Mr Kenny said he had heard of “big ass flies” in the neighbourhood, but had not seen any.

Stephen Jones and friends from the Dublin band Lobster Pot Pool Party said they were enjoying a sporting event on the seafront, which is in sight of the incinerator, but had not seen any flies of note.

Setting up a temporary outdoor kitchen at the Clanna Gael sports pitches was Cathal O’Connor of Handsome Burger. Mr O’Connor said he would have been wary of the presence of any flies as he was serving food, but had not seen any in the time he was there on Saturday morning.

The Environmental Protection Agency is to continue to monitor the situation.