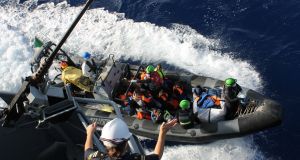 LÉ ‘Samuel Beckett’ during a rescue mission in the Mediterranean last September. For the Naval Service, not being part of the wider EU operation but working in the same theatre on tasks intimately connected to the EU mission has created limitations

Allowing the Irish Naval Service participate in a European Union migrant search-and-rescue operation in the Mediterranean will give the Defence Forces access to better intelligence and information, according to Government sources.

The “triple lock” system that governs the deployment of Defence Forces personnel overseas in humanitarian and peace-keeping operations is expected to be used to ratify the move this week. UN authorisation, a Cabinet decision and Dáil approval are needed to pass the triple lock.

Irish naval missions in the Mediterranean are currently based on a bilateral arrangement with the Italian government, and the operation is called Operation Pontus. It runs in parallel with, but separate to, the EU’s Operation Sophia, which has the participation of France, the UK, Belgium, Spain, Italy and Germany.

The Cabinet is expected to sign off on Tuesday on the proposal from Minister for Defence Paul Kehoe to have Ireland take part in Operation Sophia, with a Dáil motion scheduled for Wednesday morning.

Fianna Fáil sources said they expected the party to support the motion, thus ensuring its passage through the Dáil, although the party’s frontbench has to make a formal decision.

Operation Sophia is already mandated by the United Nations, meaning one of the three elements of the triple lock is already in place. Its aims are to disrupt people smugglers in the Mediterranean and to enforce an arms embargo of Libya. Government sources said the move has been under consideration for some time.

“Ireland would join a mission that involves 25 EU member states and enhances our contribution to the EU’s response to the migrant crisis, in particular countering illegal people trafficking and the exploitation of vulnerable people,” said one.

The Irish Naval Service migrant search-and-rescue mission in the Mediterranean began in 2015 and is based on a bi-lateral arrangement with the government of Italy.

The mission is called Operation Pontus and it runs in parallel with, but separate to, a European Union effort, EUnavfor Med (EU Naval Force in the Mediterranean), which has the participation of France, the UK, Belgium, Spain, Italy and Germany.

Irish Naval Service vessels rotating in and out of Operation Pontus have rescued more than 15,000 people from the Mediterranean since becoming involved in 2015. Most of the migrants were put to sea from the coast of Libya in unseaworthy vessels, having paid money to smugglers. After rescue, often from sinking or sunk craft, they were handed over to the Italian authorities by the Naval Service.

EUnavfor’s mission, known as Operation Sophia after a baby born in August 2015 on board the German frigate Schleswig-Holstein, is broader than the mere search-and-rescue remit of Operation Pontus, however, and includes more proactive efforts to stop people-smuggling before migrants are put to sea and need rescuing.

For the Naval Service, not being part of the wider EU operation but working in the same theatre on tasks intimately connected to the EU mission, has created limitations. For instance, the Naval Service does not have automatic and immediate access to intelligence gathered by the EU participating nations, does not have the benefit, without request, of force protection available to Operation Sophia because it is not part of the EU force, and is not part of the command structure of the EU effort.

The EU’s mission was decided by its ambassador on the security committee of the European Council, the ministerial governing body of the union. It is systematically to identify, capture and dispose of vessels, enabling assets used, or suspected of being used, by migrant smugglers or traffickers, in order to contribute to wider EU efforts to disrupt the business model of human smuggling and trafficking networks in the southern central Mediterranean and prevent the further loss of life at sea.

A second phase, agreed in September 2015, has entailed boarding, searching, seizing and diverting on the high seas of vessels suspected of being used for human smuggling or trafficking.

In June 2016, the council extended the mandate of Operation Sophia to this July 27th, adding two tasks – training of the Libyan coastguards and navy; and contributing to the implementation of the UN arms embargo on the high seas off the coast of Libya.

A Government decision to participate in Operation Sophia, backed by a vote of the Dáil and the United Nations, would adhere to the triple lock principal governing deployment of Defence Forces personnel overseas in humanitarian and peace-keeping operations.

It is understood that senior Defence Force personnel, Naval Service and others have studied the Naval Service interaction with the Italian authorities, and also the wider EU mission, to assess interoperability.

Naval Service personnel would likely relish the prospect of deeper involvement in efforts in the Mediterranean, especially if they involved integration with the wider EU efforts there.