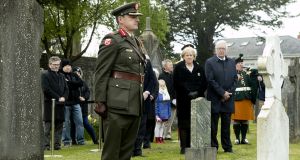 The great grandson of Peadar Kearney, who composed of the National Anthem, was among those gathered in Glasnevin Cemetery on Easter Sunday morning to commemorate the Rising on the 101st anniversary.

Beneath a leaden sky, Dualta O’ Broin sang the anthem in English and Irish at his great grandfather’s grave and wreaths were laid in honour of the composer.

John Green, chairman of the Glasnevin Trust, said it took almost 20 years for the Soldier’s Song to become the National Anthem, but it was the anthem of the rebels, particularly those held in the internment camps of Frongoch and Wakefield.

“He must have been proud to hear his words being used,” Mr Green said.

“It is sad that the State didn’t look after him better toward the end of his life, but hopefully days like today ensure he is not forgotten.”

Minister for Arts, Heritage and the Gaeltacht, Heather Humphreys attended the event, along with deputy head of mission at the British Embassy, Neil Holland and members of the Irish Defence Forces.

The ceremony began with the raising of the tricolour over the Sigerson Monument, built to commemorate those who died in the rebellion. It was followed by wreath-laying ceremonies at the monument, at the grave of Edward Hollywood, who delivered the first tricolour flag to Ireland from France, and at Kearney’s grave.

A lone piper led dignitaries and a colour party, made up of three soldiers carrying the flag, from grave to grave.

Mr Green explained, at the white-stoned grave of Edward Hollywood, how the weaver was part of a delegation that travelled to Paris in 1848 to meet the government of the second republic seeking support for the rebel cause. While the trip was not a success, Hollywood did meet the female silk weavers of Paris on the banks of the Seine and their present to him was a giant green, white and orange tricolour.

When it was brought back to Ireland, it was replicated wherever there were Young Irelander meetings, Mr Green said.

Speaking at the Sigerson Monument, he said in remembering Dora Sigerson, Hollywood and Kearney each Easter Sunday morning, the trust hoped to encourage today’s generations to explore the complex and intricate period in our history a century ago.

“Hollywood is the link to struggles past, so important to those fighting for independence,” he said.

“Sigerson and Kearney are both part of the Literary Revival, so important to all late 19th and early 20th century Irish Nationalists, but at opposite end of the spectrum. Kearney joined the IRB, Sigerson was almost a pacifist, certainly anti- war. The Easter Rising brought them together united behind the tricolour.”

Speaking after the ceremony, Conal Kearney, grandson of Peadar, said the extended family had attended to mark the pride they held for their grandfather, as an Irish Volunteer and composer.

“The State ceremony brings a deeper poignancy for us as a family,” he said.

He also said it was important, though the centenary had passed, to keep his memory alive.

Commenting on the recent vandalism of the wall at Glasnevin, erected in 2016 to commemorate the Irish and British people killed during the 1916 Rising, Mr Green said repairing it completely would be expensive.

Most of the paint, splashed on the wall on the night of April 10th, had been removed from the stone, but had remained adhered to many of the engraved names.

“The discolouration is now a green, white and gold hue, which is ironic,” Mr Green said.

“But the problem we have, the stones are very easily replaced and even the engraving is, but the labour intensive part and the expensive part is the gold leaf.”

He said they intend to go ahead with adding the names of Thomas Ashe, who died on hunger strike in 2017, and others, but at the moment they were “just going to pause” before doing any more.

“We want people to be thinking about this because when it comes to the Civil War we are going to find out things about our ancestors that we didn’t know.”