Launch by North after military parade stokes tensions, but US response measured so far 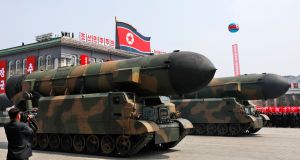 US vice-president Mike Pence described a failed missile launch by North Korea as a “provocation” at the start of a 10-day visit to Asia that will be dominated by fears of escalating tensions in the Korean Peninsula.

“This morning’s provocation from the North is just another reminder of the risks each one of you face every day in the defence of the freedom of the people of South Korea and the freedom of America in this part of the world,” Mr Pence told US and South Korean troops in the joint command.

Earlier on Sunday, Mr Pence touched down at the US air base in Pyeongtaek, 70km south of the capital, before visiting Seoul national cemetery where he and his wife Karen placed a wreath in a symbolic gesture to underscore the alliance between the US and South Korea since the 1950-53 Korean War.

As he was flying over the Bering Sea, North Korea attempted to launch an unidentified missile from the eastern port city of Sinpo, which South Korea’s joint chiefs of staff said had failed, the Yonhap news agency reported. The flight of the Scud-like missile from Sinpo, where the North has a submarine base, lasted just a few seconds.

Mr Pence is in South Korea at a time of great tension, although US rhetoric has become less sabre-rattling than before, and US president Donald Trump, while describing North Korea as a problem “that will be taken care of”, has also said that China was helping to ease the situation.

For its part, the North has repeatedly condemned US aggression. Despite Mr Trump’s remarks China, North Korea’s ally and neighbour, has warned of the possibility of war “at any time”.

The launch of what appeared to be a medium-range missile came as the US nuclear-powered USS Carl Vinson aircraft-carrier strike group approaches the Korean Peninsula in a show of force.

Mr Pence arrived one day after the “Day of the Sun”, an event marking the 105th anniversary of the birth of North Korea’s founder, Kim Il-sung, which was celebrated with a parade of military hardware, including the unveiling of three previously unseen intercontinental ballistic missiles (ICBMs).

The parade was attended by the North’s young leader Kim Jong-un, grandson of Kim Il-sung, who is known as the Dear Leader in the Kim dynasty.

The United States has about 28,500 troops and equipment stationed in the South, mostly stationed at the demilitarised zone (DMZ) at the 38th parallel dividing the Korean Peninsula into North and South.

No peace treaty was ever signed after the Korean War, and the DMZ is the world’s most militarised border, with two million North Korean, US and South Korean troops in a tense stand-off across the divide.

Mr Pence’s late father, Edward, served in the US army during the Korean War and was awarded the Bronze Star on April 15th, 1953 - 64 years to the day of the vice-president’s departure for South Korea.

South Korea warned that the missile test and grand parade “threatened the whole world” but advisers travelling with Mr Pence played down the significance, saying the launch of the missile had been well flagged.

“It’s a failed test. It follows another failed test. So really no need to reinforce their failure. We don’t need to expend any resources against that,” the adviser said.

’ According to officials in the Trump administration on Friday, the US focus in now on “maximum pressure and engagement”, putting more and more pressure on Pyongyang to abandon its nuclear programme with the help of Beijing. The immediate use of force is not planned, the officials said, despite provocations.

On Monday, Mr Pence is due to meet South Korea’s acting president and prime minister Hwang Kyo-ahn and national assembly speaker Chung Sye-kyun. The country’s president, Park Geun-hye, has been impeached and removed from office over a corruption scandal. The country holds a presidential election on May 9th.

Mr Pence is due to travel to Japan on Tuesday, and his trip will also take him to Indonesia and Australia.

The trip is the latest high-profile visit by US officials to South Korea. Secretary of defence James Mattis was in Seoul in February and secretary of state Rex Tillerson visited Seoul in March.