Relatives of 1916 patriots lay wreaths in memory of fallen 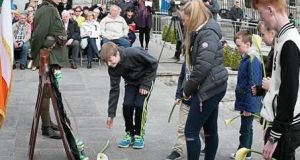 Members of the 1916 Relatives Association took part in the annual ceremony in the Garden of Remembrance on Saturday. Photograph: Barry Lyons

Seven great-grandchildren of those who took part or died in the Easter Rising Have laid Easter Lilies in the Garden of Remembrance, Parnell Square.

Members of the 1916 Relatives Association took part in the annual ceremony in the Garden of Remembrance on Saturday in a programme which included poetry readings, song and seven children walking through the crowd a wreath and seven Easter lilies.

After the ceremony a group of relatives and other interested people took a tour of the 1916 sites including the garden of the Rotunda and the lanes around the GPO and Moore Street.

Outside number 16 Moore Street, the rebels last headquarters, there was a colour parade, with a wreath laying ceremony on behalf of the GPO 1916 garrison. Participants called on Minister for Heritage Heather Humphreys to drop an appeal against a high court judgement which afforded protection against redevelopment to the Moore Street terrace, on heritage grounds.

Donna Cooney, a representative of the 1916 relatives’ GPO Garrison said the group wanted to protect of 1916 heritage battlefield on Moore Street and the surrounding lanes. She said Saturday’s event had “the full support of all the combined Moore Street campaigners and activists”.

Relatives of those who were in the GPO Garrison in 1916 have called for the area to become a vibrant heritage area including the pedestrianisation of Moore Lane, Henry Place and O’Rahilly Parade.

They also want to link up heritage trails from the GPO through Moore Street and create a linear garden to the rear of 10-25 Moore Street.

On Sunday the the 1916 Rising will be commemorated with a military ceremony on O’Connell Street in front of the GPO. It will be attended by President Michael D Higgins and Taoiseach Enda Kenny. It begins at midday.