This weekend Turkey gets ready for one of the most important political decisions in their history. But who is the architect of this political shake up, President Tayyip Erdogan? 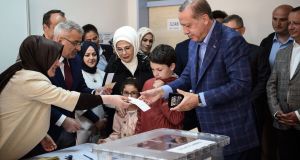 Turkish President Recep Tayyip Erdogan with his wife Emine Erdogan and their grandchildren at a polling station in Istanbul. Photograph: AFP/Getty Images 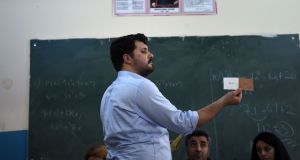 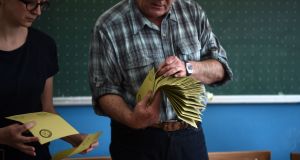 Turkish president Recep Tayyip Erdogan declared victory after voters approved by a slim majority constitutional changes that would introduce a presidential system in the country, despite its three largest cities, Istanbul, Ankara and Izmir, narrowly voting against the proposal.

The Yes campaign won 51.3 per cent of the vote, according to Turkey’s state news agency.

Sadi Guven, the head of Turkey’s high electoral board, confirmed the passage of the referendum on Sunday night, based on unofficial results.

The result puts Mr Erdogan in pole position to assume political control of the country. He has occupied the presidency, a largely ceremonial role in Turkish politics, since his election to the post in August 2014.

However, on Sunday evening the opposition Republican People’s Party rejected claims that the Yes side had secured an undisputed victory, claiming that, among other issues, the Supreme Election Commission should not have accepted ballots without official stamps.

Although previous elections and referendums saw independent and opposition media outlets report the results from across the country, Sunday’s count was reported and broadcast by the state Anadolu news agency.

Several incidents occurred during polling, with at least three people killed at a polling booth outside the predominantly Kurdish city of Diyarbakir. Anadolu Agency reported an attack on an AK Party bus in the eastern province of Van late on Saturday night that killed the nephew of a local politician.

Voting in Turkey’s major cities largely passed off without incident. In the Kadiköy district on the Asian side of Istanbul, a predominantly secular area that saw an energetic campaign against the constitutional changes over the past two weeks, voting at the girls’ technical school was steady throughout this morning and a police car was stationed outside throughout the day.

In the Moda neighbourhood, Easter Mass-goers and elderly voters crowded at streets and cafes.

“Yes, I voted and of course [I voted] No because Erdogan wants to be a dictator and he is not a democrat,” said Sinan Beritan Mehmetoglu, whose mother, Sengul, the head of a social democratic Kurdish party in the eastern city of Kars, was detained by the authorities in December.

“I don’t want one person to be in charge of Turkey . . . Democracy will come without Erdogan,” said Mr Mehmetoglu, who this weekend undertook a 870km round trip from university to his home town to cast his vote.

The Yes’ campaign prevailed across the so-called “Anatolian tiger” provinces of central Turkey, long-standing centres of power for the ruling AK Party that have been transformed by investment over the past decade.

Traditional AK Party supporters were helped over the line by backing from the right-wing Nationalist Movement Party, Turkey’s smallest parliamentary party. Overseas votes from Germany and the Netherlands, countries that were involved in a series of diplomatic spats with Ankara in recent weeks, also appear to have proved crucial to the Yes campaign.

The Yes campaign dominated Turkey’s airwaves throughout the campaign as many of the country’s independent media outlets had been shut down over the past 12 months following a crackdown against outlets allegedly linked to Kurdish and opposition organisations.

Although voting in elections and referendums is compulsory in Turkey, Sunday’s turnout of more than 85 per cent of the 55 million Turks eligible to vote was considered high.