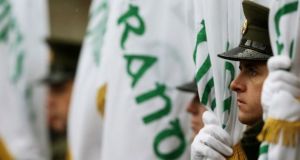 Members of the Defence Forces during the first major event in Ireland to mark the centenary of the 1916 Rising, at Dublin Castle last year. Photograph: Brian Lawless/PA Wire

Commemoration of historic events and remembering those who died in conflicts invariably involves making moral judgements on the participants and the justness of the violence involved, a leading moral theologian has said.

Regius Professor of Moral and Pastoral Theology at Christ Church, Oxford, Prof Nigel Biggar who is due to participate in the West Cork History Festival this weekend, says commemorations of events such as the Battle of the Somme and the Easter 1916 Rising will invariable involve deciding on who was the prime victim and who was the prime aggressor.

When it comes to reflecting on whether the violence of such events can ever be morally right, it is only to be expected that people prefer versions of history that confirm their prejudices, but wise consciousness requires people to have the courage to expose themselves to disturbing truths, he said.

Militating against such courage is anxiety that if someone’s chosen narrative is proven wrong then the very ground on which they stand - such as the legitimacy of the state in which they live and give allegiance - may be undermined, he said.

In almost every conflict there will be moral ambiguities where members of the ‘just’ side will perpetrate atrocities, such as the Allies’ bombing of Dresden in the second World War, while members of the ‘unjust’ will include some very noble people such as Hitler bomb plotter, Claus von Stauffenberg, Prof Biggar said.

It is possible to continue to believe in the overall justness of one’s own people while extending a measure of sympathy to the other side, but in the case of bitter conflicts such as the Irish Civil War, it may takes several generations before the cost of facing the complicated truth becomes bearable, he said.

Easter Rising
Prof Biggar, who is due to participate in a panel discussion in Skibbereen this weekend on the commemoration of the first World War and Ireland, has previously argued that the Easter Rising cannot be considered a just war.

In a lecture he gave at St Patrick’s Cathedral in Dublin in January 1916 - before the 100th anniversary commemorations of the Rising, Prof Biggar argued that, unlike the Battle of the Somme which took place in the same year, the Easter rebellion could not be morally justified.

Applying the Christian principles of a just war, Prof Biggar argued that just war reasoning requires force only to be used to address a grave injustice which he suggests must “be a wrong sufficiently stubborn and persistent “ as to make it unreasonable to continue to trust in the powers- that- be.

“Otherwise the rebellious resort to arms is premature and offends against another criterion of just war - that it be waged only as a last resort, all feasible, peaceful alternatives having been exhausted,” said Prof Biggar, who taught at Trinity College Dublin in the mid-2000s.

“My view is that the Easter Rising lacked the marks of just cause and last resort ...... my view is that the British dominated government in Dublin, against which the rebels took up arms, was not persisting in grave injustice.

“The Irish people had been electing their own representatives to Westminster since 1801 and consequently Irish issues had succeeded in dominating parliament business for much of the later 19th and early 20th centuries and as a result by 1916, all of Ireland’s grievances had been addressed.”

He instanced Catholic Emancipation which had ended the exclusion of Catholics from public office, the Wyndham Land Act which addressed the vulnerability of tenant farmers and the 1913 Home Rule Bill in support of his thesis that Ireland’s grievances were being addressed.

Prof Biggar argued “there was no grave, persistent injustice to provoke the 1916 rebels” and the Easter Rising, which led to the deaths of 485 people, was “less a last resort in fending off a grave wrong than an aggressive attempt to provoke it” by the rebels in the GPO and elsewhere.

“Instead what motivated them was a belief in the cathartic property of nationalist bloodshed, an atavistic hatred of the British political and cultural connection, and a revolutionary élite’s fear that the Irish people were becoming decadent in their contentment with the status quo.”

Prof Biggar will join with Ruth Dudley Edwards, Eunan O’Halpin, Julia Neuberger and Kevin Myers at a panel discussion on commemoration at the West Cork History Festival on Sunday.