Orange Order protest rally in March 1986 against the signing of the Anglo-Irish Agreement. Photograph: Matt Kavanagh

Having lain undisturbed in the Military Archives for the last three decades, the Defence Forces’ plans for a possible invasion of Northern Ireland offer an alarming insight into the potential for volatility in 1986.

Feeling betrayed by concessions made to the Republic in the 1985 Anglo-Irish Agreement, the more reactionary elements of Ulster loyalism had already begun to wage a more militant campaign calling for the repudiation of the deal.

Mass boycotts reminiscent of the Sunningdale strikes of 1974 were initiated in response to the southern government being given a greater consultative role in the affairs of Northern Ireland, and 15 leading members of the Ulster Unionist Party resigned their parliament seats in protest.

State papers from 1986 indicate that high-ranking British officials such as cabinet secretary Robert Armstrong considered the declaration of an independent state by unionists an eminent possibility.

The high-level Defence Forces paper warns that within such a state “all the organs of power particularly the security services would be in the hands of loyalists.”

Indeed, withdrawal from the territory was a popular topic of discussion among Westminster elites exasperated by the attitudes of unionists and nationalists alike. Against this backdrop, it is little wonder that the Republic was preparing for the outbreak of serious conflict across the Border.

This would not, however, compromise the loyalists’ military capabilities, with reference made to the formation of battalions comprised of UDR members and reservists, and backed up by loyalist paramilitaries and armed militia enlisted from the ranks of the RUC.

“The entire force’s armament could be supplemented by purchases on the international market,” it warns.

“The ease with which Israel (1948) and Biafra (in 1967) . . . equipped large forces with modern weaponry at short notice emphasises the seriousness of this potential,” it continues, while also referencing the region’s existing arms and heavy engineering industry.

Despite ostensibly putting forward three options – the mass evacuation of nationalist refugees, the protection of nationalist areas and a full-scale assault on the security forces of an independent Northern Irish state – the memorandum makes it clear that the latter course of action would become almost inevitable in the case of an invasion. 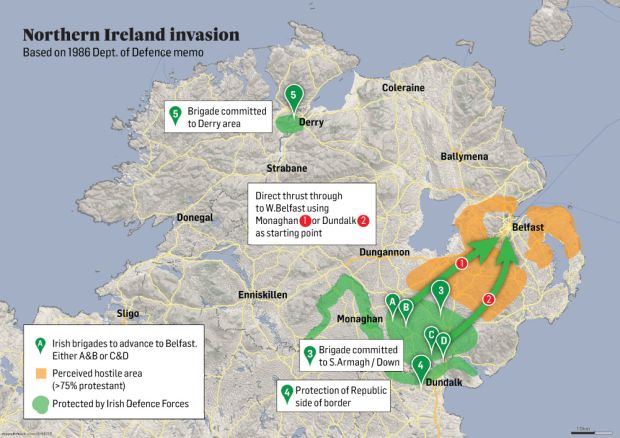 “The only sure defence of those areas would be the destruction of those forces threatening them”, it says on the prospect of intervening to guard nationalist enclaves. The memorandum later states “there is NO possibility for the large scale evacuation of refugees [from Belfast] without first destroying the loyalists’ military capability”.

The “protection of nationalist population centres” invasion strategy also broached the alternative possibility that peacekeeping patrols could eventually be handed over to “UN/EEC forces” following a “short-term defence” by Defence Forces troops.

This strategy combined with a sea assault/transport to Belfast harbour would be complemented by an “infiltration element”; an indication that the authorities may have considered deploying guerrilla-style tactics to soften the northern capital’s defences.

Roughly shaded sketches of Protestant and Catholic areas of Northern Ireland using orange and green coloured markers serve to further detract from the document’s credibility as a blueprint for cross-Border aggression.

“The aims and attitude of PIRA and other nationalist paramilitaries would be incompatible with the objectives of any interventionist force from the south,” the document reads.

“They would be alert to exploit any outbreak of sectarian violence so that they could cast themselves in the role of protectors of the minority.

“It is the declared aim of the PIRA not only to destroy the Northern state but also the Southern one and replace them with a united socialist workers’ republic . . .

“It would be foolish to think that the paramilitaries would not actively fuel the hostilities until they decided that their objectives had been achieved.”

It goes on to advocate for “comprehensive, continuous” intelligence-gathering exercises regarding loyalist military capabilities in the short term, and says the immediate placement of a number of brigades along the Border “would itself act as a deterrent” to violence in the North.

The Army developed the contingency plans following an August 1985 meeting of the Republic’s Council of Defence which discussed the prospect of intervention in the North “on the basis of ‘we cannot stand idly by’”, a misquoted allusion to former taoiseach Jack Lynch’s speech following the outbreak of the Troubles in 1969.

Whereas the Army had a strength of just over 8,000 personnel in 1969 the numbers enlisted in the permanent Defence Forces stood at 13,500 by 1985, and the 1986 attack plan did not envision opposition from seasoned British Army companies as would certainly have been the case in 1969.

Even if it did have the conviction to launch an offensive, Lynch’s government was also hampered by the ramifications an act of aggression on a European neighbour.

The Council of Defence – which included the minister for defence Patrick Cooney and secretary of the department as well as the chief of staff, adjutant general and quarter-master general of the Defence Forces – voted unanimously against any possible intervention in Northern Ireland at its August 1985 meeting.

This perspective contrasts sharply with the contents of the subsequent invasion plans, which state that the Defence Forces “have a capability for intervention to achieve certain objectives” in regard to Northern Ireland.

All sides were, however, agreed that any move to invade the North would result in significant casualties, with both the Defence Forces memorandum on Northern Ireland and the notes of the Council of Defence meeting unanimous on the potential for loss of life.

“The deployment of the Defence Forces in Northern Ireland would carry with it the near certainty of fatal casualties,” an aide memoire for the government reads, with military intervention described as a “last resort” to be used only if an “unrestrained assault” on nationalists by loyalists were to occur.

In any event the feared conflict did not come to pass, and so it is difficult to know how seriously the proposed contingency measures were taken by the government and cabinet of the day.

Notably, political aims such as the longer-term annexation of the six counties or an amalgamation with the Republic are not discussed in any of the briefing materials, which focus exclusively on operational manoeuvres to restore “peace and order” in the region.

Case against rail link from Athenry to Claremorris ‘fundamentally flawed’

5 Schools have 14 staff on leave over child safety concerns