Analysis: Grip of religious bodies on schools resonant of another era 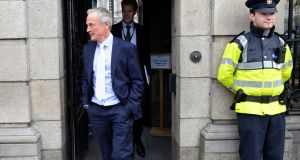 The four broad options proposed by Mr Bruton – which focus on catchment areas, quota systems and an outright ban on using religion in admissions – all have potential pitfalls. Photograph: Eric Luke

Society has changed dramatically in recent decades, yet the firm grip of religious bodies on education means the system feels stuck in a very different era.

Publicly funded schools are legally permitted to discriminate against students in their admission policies based on their religion.

In a system where 96 per cent of schools are run by a religious patron – mostly Catholic bodies – this means non-religious or minority faith children can be denied access to their local school and parents are left struggling to find them a place.

Yet, more than a third of marriages nowadays are civil rather then religious. Other surveys indicate that as few as one in four of the population are regular church-goers.

Almost everyone – including the main churches – agrees that controlling 96 per cent of primary schools is not in anyone’s interest in an ever-more pluralist society.

The question of how to ensure all children have access to their local school is another matter.

Up until recently, Minister for Education Richard Bruton had avoided any detailed comment on the issue and focused on longer-term plans to increase the number of multidenominational schools.

His intervention today, in which he will announce plans to remove the “baptism barrier” from education, is a significant development.

Fine Gael has now joined all the major parties in explicitly supporting plans to ensure non-baptised children have access to their local schools.

However, this will mean navigating a complex array of legal and administrative landmines. Competing articles of the Constitution protect both the right to religious education and protection against religious discrimination.

The four broad options proposed by Mr Bruton – which focus on catchment areas, quota systems and an outright ban on using religion in admissions – all have potential pitfalls.

And all the broad options involve an array of potential constitutional, technical and administrative difficulties.

The question of how big an issue the “baptism barrier” is is itself a hotly contested issue.

While ESRI research has indicated that about 20 per cent of schools are oversubscribed, Catholic groups say this is misleading and based on multiple applications to schools. The Catholic Primary Schools Management Association says oversubscription is only an issue in between 3 and 6 per cent of its primary schools, based on a recent survey of diocesan education secretaries.

It says any oversubscription is confined to a relatively small number of schools in the greater Dublin area.

“The vast majority of Catholic primary schools take everyone who applies,” the association said recently.

However, campaign groups who support the removal of the baptism barrier say it is a major concern for significant numbers of parents across the State.

A national poll commissioned by Equate indicates that 24 per cent of parents of children of schoolgoing age would not have baptised their child if they hadn’t needed it to gain entry into their school.

Equate’s executive director Michael Barron says: “Effectively this means that the current school admissions system is forcing parents to baptise their children in order to ensure a place in their local school.”

He added: “It is really not acceptable in a modern, pluralist society that parents feel they have no choice but to baptise their child in order to ensure access to a publicly funded school.”

While there is now increased political focus on addressing these issues, it is unlikely any decisions will be made soon.

None of these measures proposed will be contained in schools admissions legislation currently being debated in the Dáil, according to sources.

Instead, Mr Bruton will call for a public consultation on the implications of these proposals. This means any change is unlikely within the lifetime of the current Government.

If there is any pattern to plans to loosen the grip of religious organisations on education, it is that change comes dropping slow.

It is six years since former minister for education Ruairí Quinn set up the forum for patronage and pluralism, aimed at ensuring our primary-school system would reflect the diversity of the population.

Plans to introduce a subject on world religions and ethics in the primary classroom – and potentially displacing faith-formation classes – also look to have fallen by the wayside.

Much of this is due to opposition from religious groups. And it is certain that plans to end the baptism barrier will also face stiff resistance from Catholic groups and others.

If the Minister’s plans are to be realised, it will require sustained political will and a determination to ensure all children have equal access to their local school.