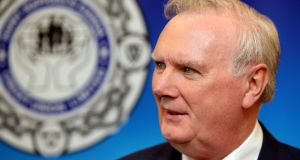 Dermot Gallagher: he was closely involved in efforts to ensure the establishment of a stable powersharing administration in the North. Photograph: Brenda Fitzsimons

Mr Gallagher (72) was an experienced and able civil servant who won cross-party praise for his behind the scenes work leading up to the 1998 Belfast Agreement. He was closely involved in subsequent efforts to ensure the establishment of a stable powersharing administration in Northern Ireland.

He also served as chairman of the Garda Síochána Ombudsman Commission (Gsoc).

President Michael D Higgins, who led the tributes, said he had learned of Mr Gallagher’s death with sadness. “Mr Gallagher dedicated a lifetime to public service, serving with distinction as ambassador to the United States and making a significant contribution to the peace process in Northern Ireland. ’’

A native of Carrick-on-Shannon, Co Leitrim, Mr Gallagher joined in the diplomatic service in 1969. He spent the early years of his career in San Francisco, at the New York headquarters of the UN and in London. He was seconded to Brussels in the early 1980s as a deputy chef de cabinet with the European Commission.

He returned to the department and was later appointed ambassador to Nigeria. He served as Ireland’s envoy to Washington in the years 1991-1997 before returning to Dublin to head the Anglo-Irish division, with the rank of second secretary general, in the lead-up to the Belfast Agreement.

He initiated the restoration of the Battle of the Boyne site, which was seen as a conciliatory gesture towards the unionist community.

“As a young diplomat, he was part of the government’s negotiating team at the Sunningdale talks in 1973 and, many years later, he was a major figure in the negotiation of the Good Friday Agreement.’’

Tánaiste and Minister for Justice Frances Fitzgerald said that in his Gsoc role Mr Gallagher had combined a deep respect for An Garda Síochána with a determination that all who served in it should live up to its highest standards.

Mr Gallagher is survived by his wife Maeve, daughters Fiona and Aoife and son Ronan.